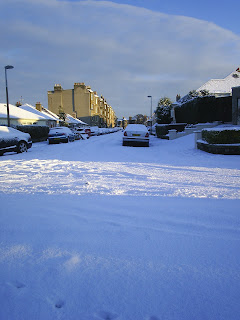 Sorry to return to the state of the local roads and pavements - but I'm not at all convinced those in charge fully realise the scale of the problems across the city at the moment?

... there's been a flurry of Council press releases and announcements today, all indicating that everything that can be done is being done - well, frankly I just think its too little too late.

There's been virtual 'political silence' from those in charge on all of this until this morning and several crucial days have been lost in trying to redeploy as many staff as possible to deal with the local roads and pavements problems. There appears to have been no serious contingency plan to cope with the New Year weather ... weather that was widely predicted long before New Year, and actually began prior to Christmas!

I don't doubt for a second that the staff on the ground are doing the best they can, but there are quite clearly not enough of them and I remain wholly unconvinced that everyone who could be redeployed to help out, has been ... the Council has some 17,000 employees and an annual revenue budget of £1billion - they should be coping with this situation far more effectively than they are.

I'm not really expecting anybody to say they've got anything wrong --- but I do hope that senior figures make sure the right lessons are learned from this whole episode and that much better contingency arrangements (especially for the redeployment of staff over holiday periods) are in place for any recurrence of present weather conditions.
Posted by Andrew at Tuesday, January 05, 2010

John Swinney's comments in relation to where he had been that the walking conditions were 'perfectly adequate' to me suggests that he has walked virtually no where!!!

Elderly people are scared to go out and if they do many are falling over which is putting them in a state of distress and more pressure on our health professionals.

Not only elderly people but people in general are genuinely at risk out on these streets as they truly are treacherous.

More has to be done to clear not only the main roads but side roads and pavements and I firmly believe more could be done.

Of course, as you say, people for other areas in the Council could be re-deployed to aid with this situation and as I said on another comment, I have, for the first time, agreed with David McLetchie's comment regarding people on community service being put to work to really help the community!

Many thanks for the further comment/s --- I do think the primary problem has been the lack of staff resource which has been assigned (or not!) to the task of clearing the pavements and roads ... lets hope that improves in the next few days, especially for local pavements?

I am horrified to read Norman Work's comments in the Evening News.

How dare he assume that we are "lazy"!! Also and perhaps more importantly, how dare he suggest that if you are under "90" you should be clearing pavements yourself. I personally have many residents who live beside me, under the age of 90, who would be incapable of clearing pavements and who are in fact, house bound due to the fact the pavements are so treacherous for them.

There are many citizens here in Edinburgh that would love to help clear our pavements not only to make them safer for themselves but also for elderly residents who live nearby but without salt (which has not turned up) how on earth are we supposed to cut through some 4" of solid ice which is beneath the snow?

Councillor Work is, in my opinion, completely out of order for his comments and should be apologising for them asap!!

What can I say - I agree he may just be regretting his choice of words :-(

I had a 10 minute telephone conversation with Councillor Work late on this afternoon.

What actually got me the most was the fact that he did admit to stating the age of "90" yet then went onto say that the Press were being "selective". I told him as a Councillor he should know fine well that the Press can be "selective" and should therefore think before he speaks!!

Upshot of it was that he promised to pass on my complaint and 'hopefully' have grit bins filled although he did say (don't think he meant to) that it was perhaps due to the fact that salt supplies were running low that the bins are not being filled.

Thanks for that feedback - here's a quote from a 'briefing note' that we were all given yesterday (5th Jan.):

"Staff will begin to replenish the salt bins tomorrow, upon confirmation that the salt delivery has been received."

As far as I can establish, the salt delivery arrived, and yet it seems many salt bins remain empty :-(

I will keep pressing for this to be rectified!