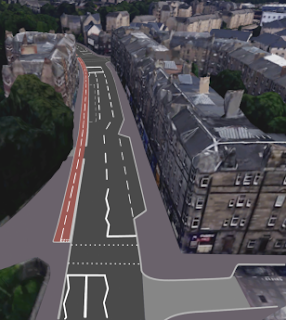 Was very pleased earlier this week to hear that the final decision on the major 'West to East' cycling link-scheme, was taken on an all-Party basis ...

... my colleague Lesley Hinds deserves huge credit for helping to make it thus - and thanks also to all of the other Political Group Transport Spokespersons, and the many Council Staff who spent a considerable time on the development of the scheme.

Relevant News Release as below:

Detailed designs are now set to be drawn up for an ambitious £5.5 million project to create a family-friendly west to east cycle route through the city centre following a public meeting today of the City of Edinburgh Council's Future Transport Working Group.

The City Centre West to East Link and Street Improvements (external link) (CCWEL) project aims to install a largely protected cycle way to and through the city centre, providing a crucial link from existing QuietRoutes (external link) in north and west Edinburgh to Leith Walk and intended to encourage many more commuters to choose to travel into town by bike or on foot instead of by car, reducing congestion and contributing to improved air quality as well as boosting health and fitness.

Today a decision was reached on a number of outstanding design issues which required to be finalised after the scheme's approval in principle by members of the Transport and Environment Committee (external link) on 30 August 2016.

Following a Capital Coalition motion approved by the Committee, a new stakeholder group was created to help project staff finalise the design.

The group, whose members include the Transport Convener and Vice Convener, the transport representatives of the other political groups, local ward members, relevant local groups and selected officers, has met on four occasions over the past few months, with two sub-groups also convening to focus on issues specific to Haymarket and Roseburn.

There was also a traffic modelling session to show stakeholders the traffic impacts of the proposals in the Roseburn area.

At the conclusion of today's meeting, after hearing recommendations from the group, Executive Director of Place Paul Lawrence made the decision, under delegated authority, to go for Option A, which routes cyclists along a protected cycle way on Roseburn Terrace.

In recognition of local concerns, it was also agreed that a comprehensive review would be carried out 12 months after the implementation of the route.

Transport Convener Councillor Lesley Hinds said: “I'm pleased that we've now arrived at a final design for this bold and transformational project, which will make it so much easier to cycle and walk into and right through the city centre by linking up with our already well-used QuietRoutes across the north and west of Edinburgh.

"The stakeholder group has worked hard with us to address various issues and concerns and I would like to thank everyone involved for their time and commitment to help bring the CCWEL closer to fruition.

"I recognise the concerns of local residents and businesses and I hope we can work with them in the coming months to ensure the project works for them too."

Daisy Narayanan, Acting Director, Sustrans Scotland, said: "Sustrans Scotland welcomes the decision by the City of Edinburgh Council to support the direct route from Roseburn to Haymarket as part of Edinburgh’s City Centre West to East Link cycle route. It has come after an extensive consultation and stakeholder engagement which has been exemplary in terms of tackling a sensitive issue and taking account of both the aspirations and concerns of all communities involved.

"We are keen to support the City of Edinburgh Council in a project which, when implemented, should provide major benefits for Edinburgh as a whole, and bring renewed vibrancy to neighbourhoods along the route. We believe this project would be a strong contender for the competitive grant funding round as part of the Community Links funding programme.

"Indeed, we view this project as a step change for the City of Edinburgh - one that acknowledges and emphasises the substantial benefits the scheme can bring to the city via efficient, healthy, active transport."

The stakeholder group will also act as a ‘sounding board’ throughout the detailed design and eventual statutory processes involved in bringing the CCWEL to fruition.