All is not what it seems? 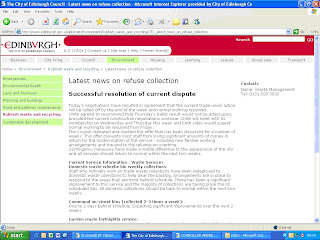 Things are bad when you have to resort to 'screen-shots' of the Council's website to make your point :-(

Here's the headline from last night (as I referred to in an earlier post yesterday) - it clearly states "Successful resolution of current dispute".

You'll notice my earlier link to it is now broken??

Well, this morning the Council headline reads differently, as you can see in the second screenshot (not sure there's much point in putting up a link, as it will be taken down in due course, no doubt?!) - it clearly states "Resolution of current dispute likely". 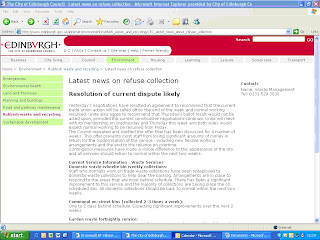 This might not all seem earth-shattering to some of my readers ... but for me, its just yet more evidence of the complete malaise at the heart of the current Lib/Nat Council Administration ...

... where's the truth; who has authorised all of this; who is in ultimate charge; does nobody care about these constant mixed messages; is it acceptable to alter the second largest Council in Scotland's website in such a fashion???

It is indicative of a swaggering arrogance that no politician-in-charge appears to care about these important details ... and it's details that make the bigger picture.


NB - you can click on the screenshots for better definition ...
Posted by Andrew at Tuesday, August 04, 2009

This is probably just an update to reflect an ever changing situation. That's the good thing about websites - it's the main reason that the internet has become the most up-to-date and dynamic source of news.

A mixed message is when two contrasting messages run at the same time but updated information can only be a good thing.

Nothing to be too concerned about really. Is it?

Whilst I agree with you about the worth of web-sites (that's why I take some time to keep a regular blog!) I fundamentally disagree with you on this specific issue in question ...

... it's not (in my opinion) acceptable to claim that a dispute has been 'successfully resolved', only to then change that the next day to 'likely to be resolved'.

Not exactly good 'industrial relations' --- and not likely to help resolve the current total lack of trust between both sides involved in this dispute.

To be fair, that is a good point. To say something is successfully resolved when it isn't ain't great!

However, industrial relations is notoriously tough and things change very quickly. Perhaps websites make it too easy for situation updates to be made too often in such circumstances.

No matter how tough a situation it may be, I can't imagine how things must have been in the 70s and 80s.

Someone has just 'jumped the gun' in their interpretation of events and shoved it up on a web-site (not something I would ever do, of course!) ... but, joking aside, the web-site in question happens to be that of the 2nd largest Council in Scotland and that's what I find pretty astounding.