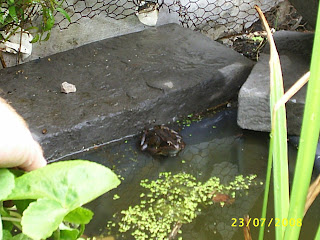 No - the post title has nothing whatsoever to do with by-election candidates some 50-miles to the West ;-)

... enough (for now) of all things 'Glasgow East' - I was very briefly down at the allotment today, as we're away soon and it was the last chance to get over there before we all escape for our main summer break ...

... AND - wait for it - the pond,which as regular readers will know is literally only a few weeks old, already has a resident frog!!

Of course, the photographic proof is above :-))

Junior has already named him "Kero-chan" ... doesn't mean a lot to me, but apparently its after a Manga character out of a book entitled 'Sergeant Frog'??

I (obviously!) immediately tried to canvass his political views, but he appeared entirely dis-interested ... maybe a 'Glasgow East' message today after all?
Posted by Andrew at Wednesday, July 23, 2008

May be there is now hope for a Frog taking high office now.