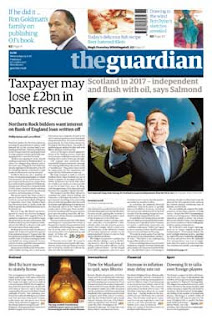 Scottish Budget Day - I mentioned it was coming up last week - and the mainstream press do appear to be in a bit of a lather over the whole event ... it's even made the front-page of the Guardian today!

... and I find no reassurance from the fact that the SNP are going to pontificate on all of this in today's budget statement as if a deal has been finalised with COSLA already - when the truth is that COSLA Leaders don't even meet to discuss it in full plenary until this coming Friday (16th November).

I do sense an absolute furore of political activity over the next week on all of this ... I just hope that full and fair funding of Local Government services isn't lost in the maelstrom :-(
Posted by Andrew at Wednesday, November 14, 2007