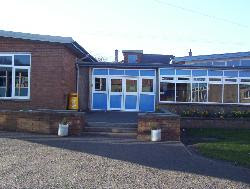 St. Cuthbert's Primary School public meeting this evening ... I would say well over 200 people attended, which in itself is a big statement of the strength of feeling over it's 'proposed' closure.

It was principally a 'planning meeting' to organise an effective campaign in the run-up to, and during, the January/February 2008 formal consultation period ... but it was clear there was a lot of anger at the way the whole process had been handled to date.

I agree that local people have every right to be angry ... I still can't, for the life of me, see why the new Administration didn't just listen to the Deputations last Thursday ... they could easily have been asked to speak collectively, based on geography; or some similar criteria? As it was, we ended up listening to an hour of deputations on Meadowbank (all well and good) and one deputation about putting a tunnel under the Firth of Forth, when there wasn't even an item on the agenda about that subject ... but we couldn't listen to school parents??

Anyhow, back to this evening's meeting ... one significant (and I think valid) worry that did come up a lot was the reputational damage this whole process could do to the school. Even if (and it has to be an 'if' at the moment) it is saved, then existing and prospective parents could still be 'worried' into moving current children and/or applying for new child places at another school.

I find it all pretty annoying (to say the least) ... schools like St. Cuthbert's should never have been on the list and I've yet to hear any rational argument as to why it is? As far as I can see, it meets only 1 of the 10 criteria for Primary School closure consideration ... and that's "can be accommodated elsewhere". Hardly a rock solid case to shut it.

All that said, one 'positive' that came from the evening - and I guess the events leading up to it - was a recognition of the true value of a local school to a community and how important it is that such a facility should be supported. As someone at the meeting optimistically said ... 'if nothing else, this whole process will pull us all together and make the community stronger'.

I certainly hope that will indeed be a silver-lining in an otherwise unnecessary black-cloud for the local area.
Posted by Andrew at Monday, August 27, 2007