Residents continue to be satisfied with life in the Capital 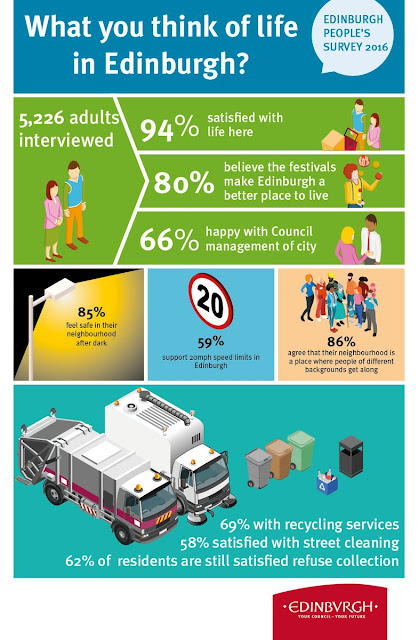 Residents continue to be satisfied with life in the Capital, the latest Edinburgh People Survey has shown.
The City of Edinburgh Council’s annual study, which is the largest of its kind in the UK, found 94% of the 5226 respondents are satisfied with the city as a place to live, while two thirds said they are happy with the way the Council manages the city.

Survey participants also reported feeling secure in their communities - around three quarters don't believe vandalism, anti-social behaviour or alcohol-related disorder to be a problem, while 85% feel safe after dark.

Feedback showed an increased perception of diversity and inclusiveness too, with 86% agreeing their neighbourhood is a place where people of different backgrounds get along – up from 81% in 2014 – and 94% agreeing Edinburgh is welcoming and accessible to people of all ages.

Councillor Andrew Burns, Council Leader, said: “There is a lot to be pleased about in this year’s Edinburgh People Survey results – despite an increasingly challenging financial climate and demand for services, we continue to see a high level of satisfaction with life in the Capital.

“What’s also clear is that people feel safe, welcome and included in their local communities, regardless of their background, which certainly adds to the quality of life here.

“While we are encouraged by positive feedback, the survey has allowed us to take stock of the areas the public feel we need to improve too, and this will help inform our priorities moving forward.”

Councillor Frank Ross, Depute Council Leader, added: “Every year the Edinburgh People Survey gives us an insight into what the public feel we are doing right, and the things they want us to do better.

“It’s great to see such high satisfaction this year with services like public transport, parks and our calendar of cultural events, but we also acknowledge the areas that scored lower, and intend to act on these concerns to improve the city for everyone.”

Despite ongoing budgetary constraints, almost half of residents believe the Council offers good value for money, while there was a rise in the proportion who agree that the Council displays sound financial management – 33%, compared to 24% in 2014 and 29% in 2015.

There was recognition, however, that this figure could be improved and that the survey offered the opportunity to focus resources on the areas that matter most to people. Other areas for improvement include street cleaning, roads maintenance and cycle safety.

A number of new questions added to the survey, which is now in its tenth year, highlighted residents’ travel habits, revealing the most common form of transport to be bus – 68% had used the service in the last month. Respondents travelled on foot most frequently—on average 5.2 days a week compared to 4.6 days a week driving.

Key findings in the Edinburgh People Survey 2016 include:
Information gathered by the survey is used throughout the year to inform work with services, while identified areas for improvement will be addressed, with updates on progress fed back to committee mid-year.
The survey is undertaken through face-to-face interviews with residents across the city’s 17 multi-member wards each year, conducted in the street and door-to-door.

Members of the Corporate Policy and Strategy Committee will consider the survey results on Tuesday, 28 March.