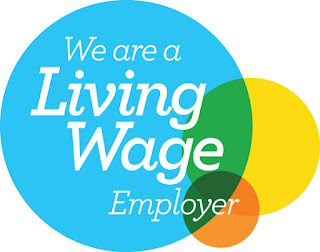 Very good news ... relevant Release is available here, and I'll also paste the main text below for ease of reference:

The City of Edinburgh Council introduced the Living Wage for its employees in 2013 and has now gained accreditation through the Scottish Living Wage Accreditation Initiative.
As part of the accreditation process the Council has now adopted the Scottish Government’s guidance on fair work practices relating to procurement, which means the Council can take into account the way in which prospective suppliers treat their employees when it comes to awarding contracts.
The accreditation process is the subject of a report(external link) which will considered by the Finance and Resources Committee on Thursday, 3 November.
Councillor Gavin Barrie, Economy Convener, said: “Accreditation from the Scottish Living Wage Accreditation Initiative is positive evidence that we value both our employees and those who provide services through contracts and grant funding. It also supports the Capital Coalition’s pledge to promote Edinburgh’s economic growth and prosperity.
“Research has indicated that the living wage leads to improved staff attendance, greater efficiency from workers, better staff loyalty and increased retention rates. I for one am delighted that thousands of Council staff have been benefiting for the past three years since we introduced it.
“By also adopting the Scottish Government’s guidelines on the Living Wage and procurement we are encouraging other organisations to show a positive approach to their workforce and demonstrate their commitment to fair work practices.”
Peter Kelly, Director, The Poverty Alliance, said: “With over a quarter of a million adults living in in-work poverty in Scotland, it is clear that the traditional route out of poverty, work, is not working.  Paying a real Living Wage is a crucial step to addressing these unacceptable levels of in-work poverty.
“I hope that other employers across the public, private and third sector follow the lead of the City of Edinburgh Council and join the growing Living Wage movement in Scotland.”
The City of Edinburgh Council introduced a Living Wage for all employees on 1 January 2013 and continues to pay a Living Wage to all relevant staff as part of the agreed overall pay settlement for Local Government employees. The current rate Living Wage rate is £8.25 an hour. A new rate will be introduced on Monday, 31 October, and organisations have six months to implement this.
Further information
* Living Wage Week(external link) is a UK-wide celebration of the campaign for a real Living Wage that meets the cost of living and the network of Living Wage employers.
* It takes place each year during the first week of November. This year it runs from Sunday 30th October to Saturday 5th November. The new UK and London Living Wage rates are announced every year on the Monday and rates are announced simultaneously in cities around the UK whilst the London rate is announced by the Mayor of London.
* The calculation of the independent Living Wage rates is overseen by the Living Wage Commission(external link), based on the best available evidence on living standards in London and the UK. The Commission was set up in January 2016 and is appointed by the Living Wage Foundation. It is drawn from leading Living Wage employers, trade unions, civil society and independent experts.
Posted by Andrew at Friday, October 28, 2016