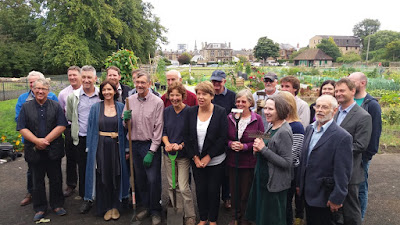 Great to see - especially as an 'Allotmenteer' myself - some new allotments being opened in the City ...

Edinburgh’s newest allotments have been officially opened on the site of a former bowling green in Leith.
Transport and Environment Convener, Councillor Lesley Hinds, was joined by members of theFederation of Edinburgh and District Allotments and Garden Associations(external link) (FEDEGA),Scottish Allotments and Gardens Society(external link) (SAGS), community councils and plot holders to mark the event at Victoria Park on Wednesday (31 August). The area was transformed earlier this year after a local consultation found that some form of community garden would be welcomed on the site of one of the bowling greens, which was deemed as under-used. There are now 16 ‘mini’ allotments on site, along with a toilet and communal storage unit, plus a community plot for use by pupils of the neighbouring Trinity Academy, encouraging education in food growing, biodiversity and nature. Environment Convener, Councillor Lesley Hinds, said: “We have worked closely with the local community to ensure the redevelopment of this site benefits as many people as possible. “I am delighted to see the allotment plots are already well used, and that the garden is helping to teach local young people more about sustainable food growing and nature. “I look forward to  seeing the positive impact that other projects to transform underused bowling greens have had.” In 2014 it was proposed to redevelop a number of Council-managed bowling greens due to a significant drop in users over previous years. Other bowling greens have since been turned into tennis and petanque courts, growing areas and in one case a school playing field. Victoria Park allotments, which came into use earlier this year, have been designed to be easily accessible for people of all abilities, and were offered to both local residents and those on the Council’s allotment waiting list.  The facility cost £50k to develop, funded by the Council’s Parks and Greenspace Department, and has been created to be in-keeping with the surrounding environment.  Find out more about Council allotments.
Posted by Andrew at Wednesday, August 31, 2016