A real alternative on offer now

It was a pleasure to briefly introduce Kezia Dugdale - the Scottish Labour Leader - at an event here in Edinburgh, earlier this morning; as she outlined a significant policy announcement for our Party ...

... for those so interested, my personal Speech Note is as below; and fuller details on the actual policy can be found via this link (& full audio and text of today's event is now available via here).

In essence, I do sense a real alternative is on offer now:

If such an amendment was accepted, I'd be the first to congratulate the Scottish Government. 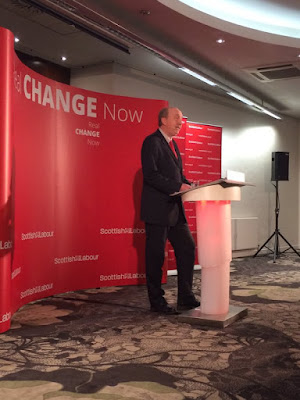 For those of you who don’t know, I’m Councillor Andrew Burns, the current Council Leader here in the Capital City

My task this morning is simply to say a few words of brief introduction before we hear from our Scottish Party Leader, Kezia Dugdale

I’ve been a local Councillor for 17-years this coming May ... I was first elected on Thursday 6th May 1999, the very same day as the first Scottish Parliament elections

So I’ve experienced all four Scottish Parliament terms – as a Senior Councillor, and latterly this last term as a Council Leader

And I think it’s fair enough to say that I’m probably one of the least-tribal Council Leaders in the country ...

... indeed, I’m so non-tribal, that I’ve spent the last 4-years in a two-Party Coalition with my local SNP-colleagues

I mention all of this just to underscore that I am not one prone to anti- Scottish Government sentiment just because of its current political colour ...

... but frankly, having just set our own Edinburgh Council Budget for the 2016/17 financial year: enough is enough

Local Authorities – local communities - across Scotland cannot go on like this

I have just taken £85.4million pounds out of our 2016/17 local Budget (that’s a lot of money and a lot of service reductions) ... and I’ve done it, under central diktat with no choice but to sign-up to certain conditions, and no genuine ability to raise alternative revenues

There is an alternative – of course that alternative isn’t necessarily easy ... but the difficulty in making the argument for a radically different course of action, is as nothing – as nothing – compared to the difficulties that the removal of £85.4million from our local Budget is going to impose on local communities here in Edinburgh

Politics is about choice

Do we simply accept and manage austerity

So, colleagues – I’m delighted to welcome Kezia Dugdale, Scottish Labour Leader, and to invite her to set out our alternative – our choice ...