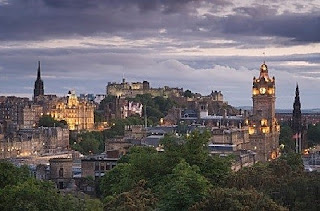 Spoke at the 3rd annual City of Edinburgh Council Conference this morning - some details via here ...

Many thanks for that introduction Euan …
… and good morning colleagues, & can I add my own very warm welcome to this “City of Edinburgh Council Conference” event,
here in the City Chambers.
It’s great to see so much interest in today's 3rd annual Council Conference.

Euan, in the next 15-minutes or so, I want to start today’s proceedings by focusing on 3 main points:
1.   The City of Edinburgh itself
2.   The wider City Region & our Partners
3.   The view from Scotland’s 7 main Cities
& finally; I’ll say a few words about the Future City?
And talking through these 3 areas, I want to make the argument that Edinburgh is approaching a pivotal point in its development; and that a series of key – quite imminent – decisions, will have a crucial impact on our future direction.
For me, these are decisions that cannot be taken in isolation by the Council, the wider public sector, the private sector, or the voluntary sector … the whole City, and wider region, needs to be involved.

So – firstly; starting with the City of Edinburgh itself …
For all of the obvious challenges, there is absolutely no doubt in my mind that 2015 has been another successful year for the Capital City of Scotland.
Edinburgh continues to be a hugely attractive place to live, with an average of an additional 5,000 people choosing to move here every single year – that’s a 1% annual growth, which will soon see Edinburgh reach the half-million population mark.
Very few other UK-cities are drawing anything like this level of population-attraction to them on a yearly basis – and, for me, it still remains the case that Edinburgh’s overall ‘Quality of Life’ is what makes us stand out from the crowd.
And there’s simply no doubt that our local economy is a significant draw as well …
… Edinburgh is still outperforming all of our major UK-competitors; with Edinburgh continuing to rank as the city with the second highest ‘Gross Value Added’ (GVA) per resident, after London.
We also have the lowest claimant rate for Jobseekers Allowance – currently at less than 1.5% - of any major city throughout the whole of the UK.
And Edinburgh today has one of the most talented workforces in the whole of Europe – with 2015 seeing the percentage of the population of the capital, educated to degree level or above, almost reaching 50% for the first time.
And dare I mention that even the tram has had a successful year; with tram patronage increased by some 12% when compared to last year,
and the projected total of 5.1million passengers for the whole of 2015 meaning that the service continues to outperform targets set in the business model.
Turning to 2016, there is no question that the overall economic prospects for the City are positive. But that does not mean we are short of significant challenges; as perversely the success of the City economy does not translate to any direct, additional funding for the Local Authority.
Indeed, we face the double-whammy of an increasing population – with consequential growing demand for our services at both ends of the age-spectrum: more +80 years olds than ever before, requiring more social care than ever before; and more 3-5 year olds that ever before, requiring more Nursery and Primary education than ever before – and the undeniable fact that our revenue-funding is now declining;
… and anyone who noticed the local Council Budget being set last week, will know that these pressures have made for some extremely difficult decisions.
And inside the Council, as is often the case periodically whether in the public, private or voluntary sectors, we are seeing the implementation of a new management-structure; with a new Senior Management Team.
But, being the eternal optimist, these are all constructive challenges to be facing ... challenges of success and growth, not decline and stagnation.
And with a Scottish Parliament election on the horizon in May this year, we may even see the beginnings of a return of some fiscal flexibility to Local Authorities; with a serious debate already raging about the future of the Council Tax and how Local Government generally is currently being funded.
So clearly, there is much to look forward to here in Edinburgh - but also much work to do in the year ahead.
So - moving on Euan – secondly --- what of the wider City Region & our Partners therein …
I’ve clearly mentioned the strengths within the Capital itself …
… but I also absolutely understand the importance of the relationships we have with our surrounding areas of – particularly:
·        East Lothian
·        Fife
·        Midlothian
·        the Scottish Borders
·        and West Lothian
As most – if not all - of you in this room will know only too well, our local economy does not operate on local authority boundaries. We all rely on each other to help ensure the prosperity of our region and its residents.
And over the last year or so; I’ve been delighted to have been working closely with regional colleagues to help develop our city region deal bid.
Whilst we are not all of the same political persuasion, we do understand the challenges - and opportunities - for our region; and the role that a City Region Deal could have in helping to tackle these.
… because, despite the overall positive picture I’ve just painted of Edinburgh – you simply cannot deny that we are a very successful butALSO very divided City Region.
Collectively together we are responsible for over 30% of the Scottish economy and are a key economic driver of the UK – as mentioned earlier, we are indeed, the second most prosperous city in the UK and also the most productive city in Scotland. Foreign direct investment has been high, particularly in the city and the demand for workers is rising.
However, we are also a divided region; with significant numbers missing out on the prosperity enjoyed by many.

Finally Euan - what of the Future City?
Well – I hope I’ve provided some evidence … and at least some serious food for thought … that no matter how economically successful; a city the size of Edinburgh (or Glasgow, or any Scottish City for that matter) needs a wider ‘economy of scale’ to realise not just raw economic success; but also a broader success in equalising access and opportunity for all --- or for as many as feasible.
And neither the public, the private, nor the voluntary sectors can achieve this alone – it needs a partnership of all those interests if we’re truly going to ensure we can cope with the imminent demands of growth in the near, if not immediate, future.
I’ve personally come to the very firm conclusion that in order to deliver such thriving local economies; that can also improve peoples’ lives --- cities and their regions need a bit more control of their own destiny.
And I think that debate is actually beginning to take some hold – here in Edinburgh; at the City Region level; and amongst the wider Scottish Cities Alliance members …
… as the eternal optimist, I continue to hope that the main Scottish Parties – as they approach this crucial 2016 Holyrood Campaign – do think radically about the future of our Cities and Regions.
If we, as a Country, are serious about building strong and smart Cities and Regions, then there really does now need to be some further devolution within Scotland.
How hard can that really be!
Many thanks for listening.