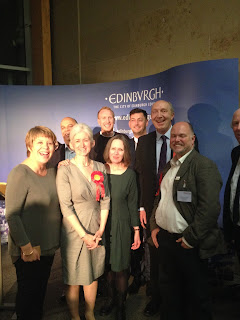 Edinburgh Labour secured one of the two By-Election vacancies in yesterday's Leith Walk Ward poll ... many congratulations to Marion Donaldson; and also to Lewis Ritchie (of the SNP) who secured the first-spot. I'm now looking forward to working with both Lewis and Marion, as part of the Capital Coalition.

I'll re-produce the relevant News Release below, and the links therein contain more detail on the result for those so interested ...

... needless to say, I'm delighted with the result and Marion's victory is indeed very well-deserved: I've rarely seen a local candidate work so consistently and tirelessly throughout a campaign - she'll be an excellent local Councillor :-)

The Leith Walk By-Election results have been announced at Waverley Court.

The announcement was made on Friday, 11 September 2015 by Returning Officer for Edinburgh, Andrew Kerr.

Two new Councillors have been elected to the ward following the election, which is the first time the Single Transferable Vote system has been used to select two members.

The following two candidates have been duly elected to serve in the City of Edinburgh Council as members for the Leith Walk Ward:

Returning Officer, Andrew Kerr, said: “I would like to welcome the two newest Councillors to the City of Edinburgh Council and look forward to working with them on matters affecting the Leith Walk Ward and the city as a whole.
“I also want to thank our elections team for all the work they have put into ensuring this by-election runs smoothly.”

For further details of the results and the Leith Walk By-Election, please see the Elections section of the Council website.