8 weeks to go until Election Day! 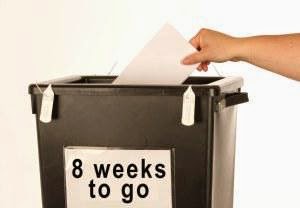 Make sure your voter details are up to date
Published Thursday, 12th March 2015

Edinburgh voters should make sure their voter details are up to date, with just eight weeks to go until the UK Parliamentary Election.


Members of the public, including students and people who may have moved home since the last time they registered, are being reminded to check their registration details are correct ahead of the vote on Thursday, 7 May.


More than 84% of the city’s residents voted in the Scottish Independence Referendum in September, which saw a record-breaking turnout across the country.

Since this time last year, the number of people registered to vote has risen by more than 15,000.
But anyone who has moved home or changed their name since the Referendum will need to ensure their details are up-to-date in order to vote in May. Members of the public can register or update their details online (external link) using the Government website by 20 April.

Dame Sue Bruce, Chief Executive of City of Edinburgh Council and Returning Officer for Edinburgh, said: “It is crucial that voters’ registration details are correct in order to have their say in the election, so I would urge all those who are unsure to check they are registered.

“We saw a record high turnout for the Scottish Independence Referendum last year and it would be great to continue this enthusiasm into the UK Parliamentary Election in May.”

The City of Edinburgh Council has launched a campaign to promote voter awareness and voter registration ahead of the election, along with the Lothian Valuation Joint Board.


The drive will use social media, news releases and other promotional material to share information and advice on taking part in the election.

Find out where, when and how to vote on the Council website.