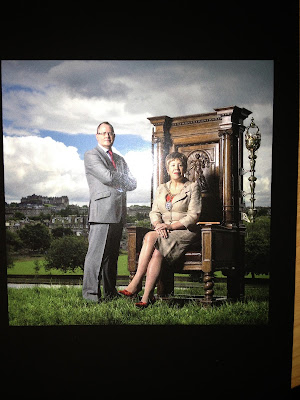 My colleague, Lesley Hinds ... who was Lord Provost between 2003 and 2007 ... had a small event this afternoon to note the unveiling of her official 'portrait' to mark her time as Edinburgh's First Citizen.

This is just a hastily taken snapshot of the final product ...

... I thoroughly enjoyed the occasion and think Lesley (and Martin!) have chosen a format --- the first ever official "photographic portrait" of a Lord Provost, I believe? --- that will stand the test of time when placed against the many other formal paintings within the City Chambers!

And believe it or not, this isn't photo-shopped ... but somehow the LP's ceremonial Chair was transported to Inverleith Park, which is within the ward that Lesley represents ;-)

The unbelieveable audacity of those who have destroyed this city for generations to come truly knows no bounds!

I respect your viewpoint, but every Lord Provost has an official picture/portrait etc. commissioned, to mark their time in the post.