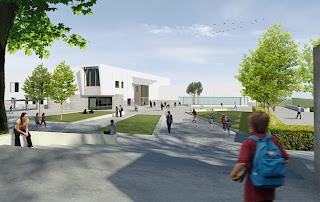 Meant to mention the fact that, at the end of last week, we lodged the Portobello Park Private Bill in Parliament ... I'll simply repeat the relevant News Release below:

A Private Bill to allow the new Portobello High School to be built in Portobello Park was introduced in the Scottish Parliament yesterday (Thursday 25 April).

The City of Edinburgh Council is taking the comparatively rare step of seeking to introduce new legislation as the existing law presents an impediment to the Council building the much-needed school.

The Council recently consulted on its proposals for a Private Bill and received resounding support to take it forward. The consultation produced the highest number of responses for any Council consultation in recent years, with over 12,000 individual responses received. Of the valid responses received from those who live in the city, 70% supported the proposals with the level of support from those in the local Portobello area being higher at 76%.

Councillor Paul Godzik, Convener of Education, Children and Families, said: “The Council is absolutely determined to deliver a new Portobello High School and this is an important milestone in the project.  The existing school is greatly in need of replacement and it is clear from the response to our recent consultation that the people of Edinburgh support our Private Bill to change the status of Portobello Park to allow the new Portobello High School to be built there.

“We believe we have a strong case to put to Parliament. This by far the best location for the much-needed new school and our open space compensation measures mean that the people of Portobello would not only gain a new park but also see improvements to other green space in the local community.”

1.   Following the introduction of the Private Bill there is a sixty day period for objections.  Local residents living near the park have already received notice from the Council that the Bill is being introduced and that they have a right to object.

4.   A local campaign group, PPAG (Portobello Park Action Group) took Court Action to prevent the new school being built in Portobello Park.  The initial court case found in the Council’s favour but on Appeal, Judges ruled that under existing legislation, while the Council could sell off the land with court permission, the law did not permit change from one of the Council’s functions to another.