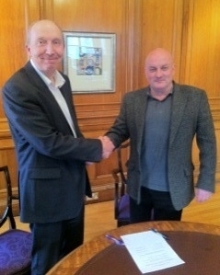 More seriously, a full report on the Council’s performance against the pledges made in the ‘contract with the capital’ will be presented to the Council meeting on Thursday 30th May 2013.

The Labour Party and the Scottish National Party have signed an agreement to work together to run the City of Edinburgh Council following the local government elections on 3 May.


The agreement follows concerted efforts to reach an all-party alliance between all the groups that had councillors returned by the electors last week. The coalition partners said they hoped to continue to work with the other groups in the interests of the people of Edinburgh.

Andrew Burns, Labour Group leader, said: "After listening to the will of the electorate and after intense negotiations over the last few days I am delighted that we have managed to reach an agreement to lead the city of Edinburgh for the next five years. Edinburgh electors gave a very clear mandate to Labour and the SNP, delivering 38 out of 58 councillors. A Labour-SNP coalition will now provide the stability and certainty needed to move Edinburgh forward."

Steve Cardownie, SNP Group leader, said: "The SNP looks forward to working in partnership with the Labour group with a progressive and exciting agenda to meet the challenges the city faces. With this strong partnership we are best placed to ensure Edinburgh serves its citizens well and emerges from the recession quickly and strongly. Our groups' economic policies are almost one and the same and we are confident they will deliver for the people of the city."

Chief Executive Sue Bruce, who was notified of the agreement today, said: "I look forward to working with the new administration, and indeed all councillors, over the next five years.

"A successful Council needs a partnership between the elected members who set the direction and policies, and the officers charged with putting that into practice. Together, our responsibility is to ensure that we take Edinburgh forward and make a real difference to the people who live and work here."

The first meeting of the new Council is on Thursday 17 May, at which it will appoint a new Lord Provost. It is intended that the other aforementioned positions will be agreed at the same meeting.

For full details of the results from the election on 3 May see our news release.