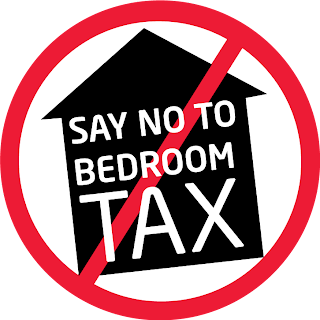 I posted twice back in late February about the Bedroom Tax - you can see the posts here and here ...

... I've subsequently had a lot of queries asking for any update on our position, as we approach the upcoming Corporate Policy and Strategy Committee on Tuesday 16th April?

The actual papers/reports for that Committee won't go into the public domain until the morning of Wednesday 10th April (and will be available on CPOL, as usual); but the local Labour/SNP Coalition has today agreed a motion for submission to that Committee, which I'm now able to publish today - the full text follows below.

I obviously fully anticipate this position being approved at Committee, and hope it clarifies the Labour/SNP Capital Coalition's intentions.

I'd also like to think it might act as a signal that both of Scotland's major political parties can actually work together constructively on contentious issues and arrive at an agreed joint-position.


One can but hope that others might be listening?

1)         Committee wishes to express its concern regarding the impact that the range of Welfare Reform measures is having on people in Edinburgh.

2)         Specifically the Committee is concerned that, from April 2013, measures to reduce housing benefit for tenants of local authorities and housing associations (Bedroom Tax) have not taken account of the acute shortage of one bedroom homes.  This will lead to significant hardship for the tenants affected and increase the risk of homelessness.

3)         Committee is further concerned that these measures may have an adverse impact on council and housing association landlords’ rental income and their ability to invest in improving their own stock and in building new, affordable to heat, homes.

4)         Committee notes that there is a significant risk of a reduction of £45 million in capital investment, funded from the Housing Revenue Account, as a result of this and other measures.

(a)           that where the Director of Services for Communities is satisfied that tenants who are subject to the under-occupancy charge have done all they reasonably could to avoid falling in to arrears, then all legitimate means to collect rent arrears should be utilised except eviction

(b)       to establish a joint working group that will include elected members, officials from Housing and Revenues and Benefits, Registered Social Landlords and tenants representatives. The role of the working group shall be to monitor the implementation and impact of various benefits changes and to contribute to consideration of further measures to support tenants.

(c)        to support calls by local campaigns to scrap the Bedroom Tax.