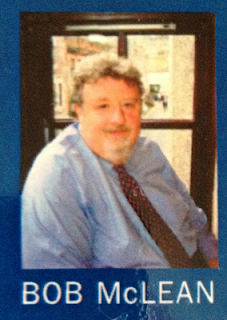 Back in Edinburgh now and no meetings today - what a relief.

Coming back from London on the train last night, I learned of the death of Bob McLean who was a long-standing campaigner for a Scottish Assembly/Parliament. I can't begin to tell you how saddened I am to hear the news.

I got to know Bob pretty well in the early 1990's when I moved back to Scotland (Edinburgh) and he, along with Campbell Christie (and many others), made me so welcome within the devolution-movement of the time.

I met Bob frequently through the auspices of the Executive Committee of the Campaign for a Scottish Parliament (CSP) on which we both sat; and also the Coalition for Scottish Democracy (CSD), which Campbell chaired.

Both men showed me ... a relative new-comer on the scene ... enormous generosity and never hesitated to advise, guide and simply spend some time with me when I asked it of them.

Bob, in particular, suffered my frequent impatience about the pace of progress with the calm demeanour of someone who knew his cause was just and would eventually be fulfilled regardless of occasional setbacks.

I learned a lot in those campaigning-years from 1993 through to the referendum in 1997 and the eventual opening of the Parliament in 1999, and my initial election as a Councillor in that same year.

I mentioned in a post last year, when reflecting somewhat on that period in my life, "that I'm not really one for heroes - but looking back, if I do have any 'political heroes' it’s those people – some of whom I was lucky enough to work with in the 1997 campaign – the ones who kept the flame of constitutional reform alive after the darkest of days. And, eventually they did indeed achieve what they aspired for."

Bob was one of those people.

Back in late 2000, Bob wrote a highly-regarded appreciation of Donald Dewar's life ... it ended with the following few paragraphs:

"The White Paper that Donald was so proud of was endorsed by the referendum on the anniversary of the Battle of Stirling Bridge. As his troops prepared for a later battle, Wallace is reputed to have told them;

I have brought you to the ring. Dance according to your skill.

That is the challenge at the heart of Donald Dewar's legacy."

Well - I actually think its also a fitting epitaph to the many people, like Bob McLean, upon whose shoulders politicians founded the Scottish Parliament.

It beholds them all to remember such.

My thoughts are with Bob, his friends and colleagues - and with heartfelt thanks for his personal inspiration.

Fine words about a fine man and comrade.

Thanks Frank - I'm truly saddened to hear of Bob's death.

Well done Andrew; he was an immemse character.

Well said Andrew, especially your bit about Bob being one of you heroes. Mine too.
Alan Smart