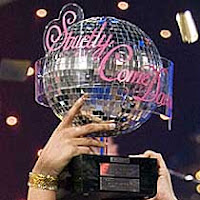 Well, survived the birthday celebrations yesterday early evening - just! Good time had by all, and the flat is still in one piece ;-)

This morning spent several hours at the final City-budget summit ... still find it utterly bizarre that the list of top table 'City Leaders' (in this Release) doesn't include those politically in charge of the Council --- or maybe it does ;-)

Anyhow, it was an 'interesting' event - after which I hastily switched on my computer (remember the phone I have is twitter-useless) to read the 'Council twitter-feed' to see what promised commentary had been put up during the event --- only to find: nothing, not a single Council tweet today? Very strange.

And - this evening - Strictly is nearing the semi-finals ... been getting a bit of stick for not blogging about it this year (damned if you do, damned if you don't!), having correctly predicted the winner in 2010 :-)

Well, for what it's worth, I've though for several weeks that Chelsee Healey (who I'd never heard of before?) has had it in the bag - and that was certainly reflected in tonight's scores. She'll probably be evicted tomorrow night now :-(
Posted by Andrew at Saturday, December 03, 2011