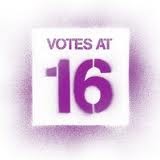 I mentioned just the other day I was supportive of extending the franchise to 16-year olds ...

... I've always considered it a bit of a nonsense that you can leave home, marry, have children, go to work, pay tax but not vote at 16.

And the fact that many young people have left school for several years before they actually get to vote (happened to me) appears even more of a  nonsense - being able to vote, whilst still within full-time education, can surely only push up turnout levels and engage young folk before they might conclude the political system has nothing to offer them?

So - I'm frankly pleased to see that the SNP may be about to extend the franchise for any upcoming referendum to all 16 and 17 year olds. How those teenagers may vote seems an entirely separate question/debate to me.

Apart from anything else - assuming the referendum doesn't take place for a couple of years - it means that my own son (nearly 14 just now) will get the vote ... I think that's to be whole-heartedly welcomed :-)

What about Local Government elections in Scotland next ... that franchise could surely also be extended prior to  the next-but-one set of elections in 2017?
Posted by Andrew at Tuesday, September 20, 2011