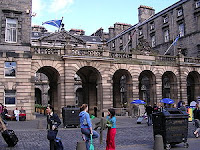 The actual 'Tram Report' for tomorrow's Special Council Meeting is now out - agenda here, and the main Report is here ...

... I promised to put our Amendment up on the blog, in advance of the meeting tomorrow, and the text now follows below. I've not seen any other Groups' draft (or suggested) Amendment.

Clearly, St Andrew Square is going to happen tomorrow, and the additionally required debt to make that so will now need to be met directly by the Edinburgh Tax Payer --- unless the Scottish Government intervenes further - whether tomorrow (highly unlikely) or during the upcoming Spending Review?

So we're calling for that additional support to be forthcoming, so that Council services - and those of Lothian Buses - can be protected. And Transport Scotland should now remain involved, and make sure the tram is delivered - but it can't be at 'any cost' to the local Tax Payer.

1. Council agrees that the report presented for decision today contains a material change of circumstances since the 25th August Tram Report.

2. Council notes that following the 2007 vote in the Scottish Parliament, in support of the Tram Project, the SNP Government instructed Transport Scotland to cease involvement with the then Tram Project Board. A project which at that point had incurred expenditure of just £44m and had received the backing of Audit Scotland, who described the project as having “clearly defined project management and organisation” with “sound financial management and reporting”.

4. Council further notes however the Scottish Government’s decision to withhold the final project grant payment, and regards this as a belated and aggressive tactic which forces the Council into an intolerable level of risk and financial commitment.

5. Council does though accept that to reject this thinly veiled ultimatum, to take the trams to St Andrew Square, would be likely to lead to the cancellation of the project.

6. Council also notes that to agree to the SNP Scottish Government’s thinly veiled ultimatum, to take the trams to St Andrew Square, means the Council will need to borrow at least £231million. This will increase current Council debt to an unprecedented level of some £1.5billion, with a specific cost to the revenue budget of at least £15.3million every year for 30 years.

7. The Council further notes that the report to the last Council meeting stated that the final cost of building the tram line from Airport to St Andrew Square cannot be guaranteed, and that there is therefore considerable concern about the potential impact on Lothian Buses’ budgetary position and their ability to maintain existing service levels.

8. Council thus remains greatly concerned that the actions proposed by the SNP Government would be likely to further increase the Council’s overall debt and lead to an ongoing reduction in services.

9. Council therefore agrees:
• That the Scottish Government needs to meet any additional cost for the completion of the tram line from the Airport to St Andrew Square
• to also investigate alternative funding models, which could alleviate the pressure on the Council budget, and report such back to the Council before the completion of the initial Airport to Haymarket section
• to request that the Council officers responsible for overseeing the delivery of the trams, along with representatives of the contractors, routinely attend the “All Parties Oversight Group” and the “Audit Committee” to report on overall project progress (thus accepting recommendation [x] on Page 4 of today’s report)

10. Council finally notes that there are ongoing and significant concerns within Edinburgh’s business community about the specific issues of: rates relief; general business support; and potential compensation.

11. Council thus finally instructs the Chief Executive to bring a separate report on the issues referred to in paragraph 10 above to the next meeting of the Policy and Strategy Committee on 4th October 2011.

Where is the mandate from the poor council tax payers for this utter madness ?

The contractors are just lapping this up and laughing at us as they count the profits.

And oh yes they can come back for more anytime.

You did this just to save face with other councillor and not in the best interests of your bosses , the council tax payers.

Thanks for the comments - this amendment (which contains a clear call for additional Government funding!) was defeated by a joint SNP/Lib-Dem position.

I will try - as soon as possible - to get all the texts up, as I did last week.

Thanks again for checking the blog.

Its another blank cheque to the contractors is it not ?

They can come back for more.

So have we got fixed deadlines and penalties in place ?

Either way we the TAX payers foots the bills for this vanity project.

Absolutely noted - that's why our paragraph 9 sought further SG funding, as it is they who are clearly adamant the project has to go to SAS now.

Probably the right decision for the city but I really do struggle with the lack of leadership,accountability,vision,etc offered by the Council. It all looks a bit like a big boy done it and ran away and from the Council body politic " it wasnae me" well who was it ??
A full enquiry must follow very soon.
PS Any truth in the rumour the refurbished Commonwealth Pool is going to be 49mtrs long instead of 50.

Points noted - and agree about the need for a Public Inquiry, and very soon.

P.S. if the tram project is anything to go by, the Commonwealth Pool will probably be a mere 25M long :-(

Its our money regardless of whether CEC or SG pays.

We pay the TAXES, We are EXTREMELY ANGRY at this Mad Decision.

I know that, and I also know that there are no winners out of this process.

Frankly I am shocked at the lack of attention to the protection of the public purse. The contract seem open ended with no penalties and movement of risk to the contractor. It seems that the contractor can simply say when hitting a problem THEY did not forsee 'Hey taxpayer pay up'. Surely there was a proper survey and due dilligence carried out by each contractor during the tendering process. That is ground radar ,desktop and borehole surveies. That formed the basis of the tender price. A legally binding agreement was made by CEC/TIE with the winning contractor complete with penalty clauses on both parties.

Why were expensive design changes allowed after the tender process and who authorised them or should they have been check ,costed and authorised by full council?

What issues in construction were the contractors not forced to absorb due to their failing to spot them during the tender process?

What is stopping the council from forcing the contractor to build the full route after all they are getting the original £540million and £230million?

That must be one of the biggest losses in the history of public works !!!! £950,000,000. Just how many public service jobs ,community centres ,schools could that save. How many roads could that resurface? How many snow ploughs and gritters could that buy ? How much personal care could that give to the elderly and disabled ? How many low paid workers could be given a decent wage? What benefit would £15 million a year give to the homeless ?

All this squandered on a vanity and loss making project to give the city a single 8 mile tram track.

Shame on all councillors and officals for this mess.

... if you search 'tram' in the top left box, you'll be able to see all my posts over the years on this topic.

In essence, there is an ongoing dispute between the contractor and the Council over responsibility and this is referenced in a lot of my posts, which should have links to numerous formal reports on trams that have been through the Council in recent years.

I agree that the whole route 'should' be what's eventually completed.