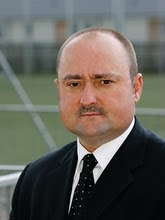 Well, a few weeks ago it was "Paul Godzik for Edinburgh Southern" ... and after tonight, its now Ricky Henderson for Edinburgh Pentlands!

An extremely close-fought contest between Ricky and Eric (Milligan), saw Ricky selected as the Labour Candidate for next May's Holyrood elections.

Four of my colleagues from the Edinburgh Labour Group are now selected to fight next year's elections ... in the nicest possible way, I'd love to lose them all to Holyrood ;-))
Posted by Andrew at Thursday, September 02, 2010