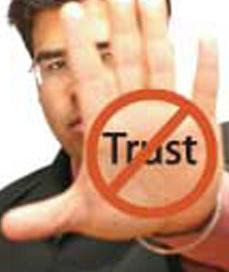 I'm generally pretty careful about what I put up on the blog, and only post about certain issues when I'm entirely convinced they are true:

- I give these as just a few examples.

Well, tonight, it appears that the SNP locally are actively planning to walk away from the Nat/Lib Coalition, that currently runs Edinburgh Council, within the next 18-months and certainly before the May 2011 Scottish Parliament elections ...

... the rationale is clear, if not twisted --- get out and blame all the ills-of-Edinburgh on the Lib-Dems before the national poll in May 2011; and hopefully thereafter bolster their collective position for that year's election-day, and the following May 2012 Local Government elections.

Never mind the Nats' role in everything up until then --- the plan is simply to just walk away and leave the hapless Lib-Dems carrying the can for the lot?

A Coalition Partnership "founded on the democratic principles of trust, equity, openness and fairness" ... I humbly suggest not :-(