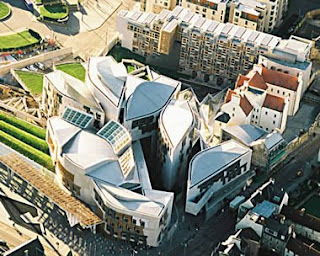 I've mentioned before that, whilst I'm no fan of "legislation for legislation's sake", the situation at Holyrood recently has really taken things to the extreme ...

... well, the contrast now has some actual depth to it as we're just about at the half-way mark of this current Parliament and it transpires only 7 Acts of Parliament have actually been passed.

That total of 7 Bills contrasts with 50+ in each of the first two terms of devolution - so, say, 25 Bills in each half-term; as compared to 7 this half-term.

Even if you want to argue that the first 8-years of devolution were 'legislative-heavy' ... a general point I could agree with ... we still appear to have gone from one extreme to the other :-(

After all, Holyrood is a "legislative body" not a Local Authority which actually 'delivers' services ;-)
Posted by Andrew at Monday, April 20, 2009

What laws would you say are missing? Which ones are just begging to be enacted?

As part of a Uni trip to the Parliament in 2006, we asked about the volume of legislation, and the people (SPCB staff) explained that there were a lot of Bills past in the first couple of years; things that people had been campaigning for years, but were never going to get through Westminster (i.e. Land Reform).

They suggested back then, that the third Parliament would be lighter on direct legislation, as after 10 years there would be 'Time for Reflection' - time to decide, 'where next?'.

Thanks for the comment - I'm actually not totally unsympathetic to the point you make, and hope that comes across in my original post?

But the rate of current legislation has taken it to the extreme ...

As just one example of what is needed: to support the SNP pledge for class sizes of 18 the Parliament really does need to legislate on the issue. Many, many other commitments could really do with the power of legislation behind them.

I appreciate that would need much more consensus than we're currently seeing at Holyrood (and all Parties have shortcomings in that regard!), but that's the world we're in if we choose to go down the route of a minority Government. It's a route that I am certainly not opposed to, but it has led to a somewhat unnecessary stalemate in the Holyrood Chamber on many, many issues.

Aye, it does. We must remember that the idea is that of Jack McConnell's however: http://news.bbc.co.uk/1/hi/scotland/2607337.stm


I think it's a combination of factors; the time for reflection after ten years, the fact that bills that have been waiting many decades have been through, and the pressures of minority government. I'm not saying it's a good thing or a bad thing; I'm just saying that it's difficult to see how else it could be different.

I don't agree that everything should be forced through with a law. Your example of class sizes for example, you can't just have a law saying that 'class sizes should not exceed 18 for p1-3' or something, because sometimes it's just not practical isn't it? I mean, if you've got a joint p1-3 class in a remote community, that has 19 pupils, is it worth building an extra room and hiring an extra teacher just to compensat, for what may be for a single year? Or alternatively move one child elsewhere? I don't think so.

Things like that are best left to the local authorities to achieve, and I'm heartened by this government's dedication to giving Councils the power to spend their money as they see fit. The end to ringfencing of funds is probably the most dramatic change for Councils since devolution, but no one talks about it (and indeed many Councils still act as though it is there).

Also, on the minority government point of view - I think this should be reflected with an increased number of non-Executive Bills. The Greens and Margo are both pushing through PMBs, and I know there's the odd SNP Backbencher or Labour MSP putting through PMBs, but why aren't the Labour Party or the Tories or the Liberals putting forward suggestions for laws? If there is a problem with the lack of legislation coming forward (although really, I still don't see the problem with that), why aren't the other parties stepping up? Labour have one less MSP; they're just as likely to get a law through as the Government!

There are some really serious and some very controversial bills coming up though, like the sexual offences bill, or the euthanasia one.

What big piece of legislation is missing?

I do actually agree with most of your points, even on class sizes ;-)

- what I was trying to get across is that the SNP promised to deliver class-sizes of 18 ... I quote:

"we will reduce class sizes in Primary 1, 2 and 3 to eighteen pupils or less."

I disagree with that as a blanket pledge - as you appear to do as well - but that's what was promised, and it needs legislation to formally enact it. The alternative is to admit it's never going to happen, and I'd respect any SNP Minister who had the courage to do so.

An awful lot of the 2007 SNP Manifesto needs legislation to ensure enactment of the pledges - I did post on this general issue some time ago:

- and I'm still at a loss to understand why Ministers persist with the illusion that much of what was promised can be delivered. It won't be.

On a more optimistic, and consensual note, I do though think there is hope of a more co-operative politics and maybe some upcoming legislation can mark a turning point:

I live in hope!