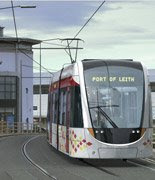 My long-term support for the tram project is well known - and post May 2007, my position did not change as I made clear not long after that election ...

... but I've also, very recently, made clear my disdain at the lack of political leadership from the current Council Coalition on the project.

Well, today, I think that lack of clear leadership has become all too apparent to thousands and thousands of commuters - it's the first day 'The Mound' junction has been closed and by all accounts it is causing complete gridlock within the City Centre.

I know that some problems are to be expected, but the scale of what's happened this morning strongly suggests to me that the changes just have not been explained, publicised or communicated effectively.

Transport Officers cannot do that job alone - they need senior political figures to get their heads above the parapet and start 'championing' the project from the front! Can you tell me the last time you saw such a politician on TV, or heard them on radio, explaining what was about to happen??

Everything (politically) appears to be reactive and not proactive - and all (political) energies are used up with the in-fighting between the Coalition partners who disagree on this project.