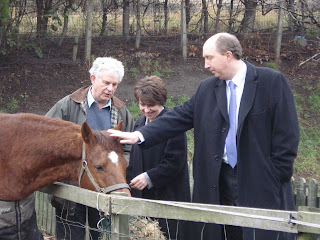 I just know I'm going to regret this ... but in the certain knowledge that other blogging colleagues will get there if I don't ... the first drink is on me for the best (clean!) caption to go with this picture? Now, you know I don't (generally) moderate comments, so be good ;-)

The picture was taken during a visit to Gorgie City Farm earlier this morning - and the horse's name is 'Red'!

... much more seriously, would be a pretty poor show (to say the least) if Gorgie City Farm suffered a serious funding reduction in the forthcoming budget-setting at the Council. I really can't think of many other local projects in Edinburgh that are quite so successful (and popular!) as this one.

... lets hope the ruling Coalition see some sense and firmly reject such an outcome.
Posted by Andrew at Monday, February 11, 2008

If there's a cut in funding? I'm pretty sure that your glorious leader was claiming it was definitely being cut - and if Wendy knows about anything she knows about funding.

Anyway, caption - Snouts in the Trough?

"It's alright Andrew, It's just a big hamster" says Wendy ! 'It won't bite you"

Burns to Alexander - "Do you think the farm would let us auction the horse off as part of a fundraiser?"

Nice to see that you don't mind hanging out with people that admit to breaking the law. There's hope for me yet.

I thought it interesting that even the poor donkey doesn't want to look at Bendy Wendy in the face. Did you hear it sniggering as you both walked off?

about a caption contest:

Farm bloke to Bendy: "Aye, he'll be the first casualty, sent off to the glue factory. Next time you are licking your air-mail envelopes to send out for donations it could be his chukkies you are tasting"

how about - Alexander to Burns:

"You seriously want me to help the Council rescue this horse from the knackers yard??"

Anonymous (1) and the Hamster caption :-)

If you contact me, identify yourself and tell me your local, I'll be true to my word on that drink ;-))