An affront to democracy 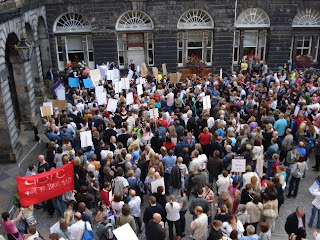 It was indeed a very long day yesterday, with the meeting lasting from 10am to beyond 8pm ... and as you can see from the picture, a lot of people turned up to protest about the proposed school closures and service cuts.

I'll come back to these two issues in later posts, but I do want to say a bit more about the meeting itself yesterday ... I frankly think the way that Deputation requests were treated was an affront to democracy. I did mention all of this in an earlier post and unfortunately my worst fears appear to have been justified.

Well over a dozen Deputation requests, including from at least one MP and one MSP, were refused a hearing on the casting vote of the Lord Provost ... the Chamber was split 29/29 and the Provost used his casting vote to pass the motion stopping members of the public from being heard, at a time of their choosing, in front of the people THEY elected to represent them.

I don't think there's any way you can claim that's democratic or fair.

I've been on the Council just over 8-years, and in that time have had to deal with some pretty vocal opponents ... I've never tried to quash open debate, and have always tried my utmost to allow those who disagreed with me to have their say.

Sometimes it cost me dearly ... but that's democracy.

Does S.O 90 also apply when the council wishes to change standing orders to restrict deputations to Council meetings in the future?

Are they in fact trying ride roughshod over standing orders if they do not get the 3/4 vote?

Well spotted! ... I did formally check this very issue out "before" Thursday's meeting.

SO 90 only requires 75% to 'suspend' the Standing Orders and a simple majority can 'change/alter' them.

SO 62 also just needs a simple majority to refuse to hear Deputations ... although I can NEVER recall that happening before in the 8-years I've been on the Council.

I did get it confirmed "before" the meeting started that the casting vote of the Provost could be used in these circumstances, thus leading to a simple majority.

The whole saga underlines the importance of what happened at the first meeting of the new Council back in May, see my earlier rant here: