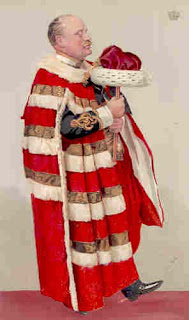 A truly dreadful rumour is doing the rounds at the City Chambers this week ... I've heard it from several sources, so that's as good as 'true' in local politics :-)

... apparently, the new 'Liberal-Nationalist-Tory' hegemony is on the verge of reintroducing Councillors Robes for all ceremonial occasions? Can you believe it??

Now, it won't come as a shock to regular readers ... but I am definitely not one for pomp and ceremony of any description, and frankly the chances of getting me into the type of get-up above are zero.

And just what would it all say about Edinburgh in 2007 - I'm sure some will think it positive - but for me, it would just be yet another nail in the coffin of Edinburgh as a modern, capital city.

Going back to age old traditions never happenend in your day Andrew...other than re-introducing Baillies of course :-)

Hadn`t heard the robes rumour, perhaps this is one of the reasons that J Inch chose to delay recovening the elections group - unacceptable in my view.

Dave - given my own way, I'd scrap the post of Lord Provost, never mind the Bailies! Andrew

P.S. I'll certainly be there on 7th August.

Just hope the moths have eaten the old ones.