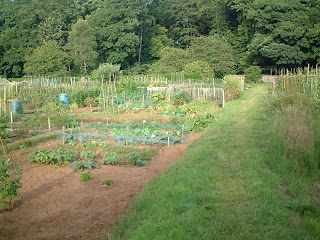 Saughton Mains Allotments Association meeting yesterday (Sunday) afternoon ... was a little bit late in arriving, which I really hate ... but hopefully I was forgiven by the end of the event?

There have obviously been fairly significant vandalism problems (thus my invite!) around the perimeter of the site - which bounds onto the Water of Leith Walkway - and there definitely need to be improvements made to the quality of the perimeter fence.

Will pursue the relevant officers and bodies next week.

I liked the atmosphere of the meeting - despite the negativity of the main subject at hand, plenty of humour and self-deprecation. Obviously no Liberals in the room :-))
Posted by Andrew at Monday, June 25, 2007