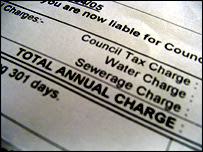 Now, I don't want to make light of this ... it IS a significant year-end overspend ... but you'd think from the reaction of my Liberal colleagues that the end of the world was actually nigh.

I'm talking about a couple of reports going to the Full Council meeting this coming Thursday - a 2006/07 year-end financial report here ... and a first 2007/08 financial monitoring report here.

Taking these one at a time:
2006/07 - we were in charge, and yes there is a significant year-end revenue overspend. But, it is adequately covered by the (unallocated general) reserves that were budgeted to be in place and the Council IS NOT in the red at the year-end. Indeed it still has £0.762million in those reserves after the over-spend has been dealt with.

Add to that, we started the year with the reserves overdrawn to the tune of some £2.508million. So, situation was pretty difficult at the start of 2006/07 - we didn't have any positive reserves - situation at the end of the year; we have £0.762million (positive) in the reserves and everything on the revenue account is paid off.

Okay - without building up the reserves, you couldn't continue on the same 'trend' of revenue spend, but hey ... welcome to the real world. Difficult decisions to make about potentially permanent 'revenue savings' (service cuts) or somehow building up the reserves again. We faced similar situations on numerous occasions and always found a way of building up reserves to cover difficulties. Any cursory glance at previous years accounts will show how this can be done - I'm not about to spell it out for the new Administration here.


So, fast-forward to 2007/08 (second report link above) - Liberals/Nationalists in charge and the Council is projecting a year-end overspend on the revenue account. Sound familiar? That's because it is - it happens most years ... officers are almost duty-bound to make it sound as bad as they can, so that elected Members take it seriously and respond accordingly. Worth remembering that the reserves are starting off in a better state this April 07 (+£0.762million)than they were in April 06 (-£2.508million). Also worth noting that no Political Group put more into Children's Services (the most under-pressure area of the budget) than the last Administration in setting this year's budget.

When presented with these pressures, it's ultimately up to elected Members whether they permanently curtail the revenue spending or try to replenish reserves ... or do a bit of both, using Council Tax and Scottish Executive grant-levels to help along the way. It's called being in charge and having to make decisions.

You crucially need to direct officers financially and not have them direct you. This is obviously NOT happening and the level of service cuts being proposed in this second report are simply unacceptable, and show a complete lack of lateral thinking by the new Administration. We won't be accepting them on Thursday - you'll be shocked to hear - and trying to blame it "all" on your predecessors is easy, cheap and untrue. There are ways of addressing these situations - as we've shown on numerous occasions in previous years.


And just to put all of this in context - the Council's revenue budget is well over £600million and the capital budget close to £400million ... a billion pounds. So, plenty of scope to make adjustments according to priorities and no ... the end of the world is not nigh.

Time to stop opposing and to start making decisions. It's called being in power.
Posted by Andrew at Monday, June 25, 2007