South Morningside School Board and Hibs!

Attended South Morningside Primary School Board (previous post refers) meeting later this evening ... gave as full an update (and as frank an update) as I possibly could. Basically don't have any definite solutions yet - to either the short-term or long-term issues facing the school; but did give a categorical commitment to reach a short-term solution for the required Nursery re-location at the March Council Executive meeting, at the very latest.

I still sense quite a bit of unease, perfectly understandably, about whether a viable short-term solution will be found in time ... but I am determined to make sure that happens. It may well not be "everyones" first choice (nothing ever is!) but I'll endeavour to keep as many people informed as possible as we all move towards a decision in late March. 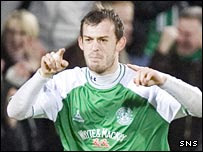 Amazingly, managed to get home in time for the second half of the Cup semi-final between St. Johnstone and Hibs - didn't see Steven Fletcher's third-minute goal, but did catch the rest of the action ;-)
Posted by Andrew at Wednesday, January 31, 2007

Looks like a great deal of political discussion but little action. Lets be clear that adding additional huts to the already overcrowded playground will be a very unpopular choice!

Although nothing has been "officially" decided its "unofficially" the easy option.

The Council has been aware of the situation since Summer 2006 and it now seems that time is running out - the playground should have never been an option...

I can only assure you that there is plenty of activity ongoing around this issue.

PLEASE do have a look at my earlier post:

... and I can only re-iterate that a short-term solution will be found by the March Council Executive meeting.

Not sure if it is too late for adding additional premises ideas, but if you are still open to suggestions and in light of the angst of having additional huts in the playground, how about; The grass area next to Morningside Park playground, or the Braid centre gardens (front or back)? Many thanks.

Many thanks - both these sites have now been looked at. Have a look at the final report by going to:

Thanks for the suggestions!