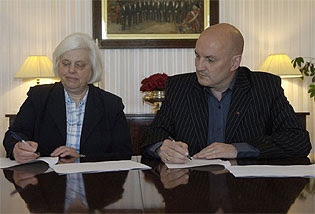 Well, well, well ... September 7th (less than a month ago - will this happen every month??) and here's what was reported (full story here) and said by the Council Leader:

LIBERAL Democrats today warned they will end their council coalition with the SNP if the Nationalists step out of line once more.

Council leader Jenny Dawe said her Lib Dem colleagues still felt a sense of betrayal at the SNP's sudden decision to withdraw their support for the controversial school closure plans.

But they had decided to carry on with the coalition and renegotiate the deal to tighten up the code on how to handle disagreements.

Cllr Dawe said: "This really did come extremely close to breaking the coalition and we are not going to be handed the same set of cards another time. If anything like this happened again, I don't think the group will reach the same decision."

How about a caption competition for that picture?

There ARE no new laws - I'm sure the council can't make laws.

I really think that it is not dress down day at Scotsman Publications so all members of staff must have their red roses firmly in the lapel. It really is funny seeing the EN make this a front page news story when it is just a couple of councillors debating a proposal. Surely you are in favour of that.

The real paragraph of the story is "I stand by the comments I made earlier this month but it is important to stress that we have simply put these proposals out for consultation at the moment. We have already had a big response, both from publicans and the licensed trade, but also from people in local communities across the city." - no story at all.

I also notice YooAnne was throwing more toys oot o the pram: "This is just another example of the complete chaos the SNP and the Lib Dems have got themselves in. They don't seem to be speaking to the other party or even amongst themselves."

God forbid one councillor in one party would disagree with a proposal of another councillor in another party. Huud the front page!

The LibbyDemmy proposal to get everyone on their bums is a bit funny though - it does make you laugh. Not too nice for the incontinent among us either - unless of course there are exceptions for card carrying incontenence suffers.

- caption competition is tempting; but it would only come back to haunt me :-(

- you're right about "laws"; and at the end of the day, don't people stop standing anyhow if they've had too much to drink :-)

Shame about the caption competition. I was thinking along the lines of Cardownie's balloon saying "So, how do you spell together?"

And Dawe's balloon saying "It's easy just remember to get her."

What about another idea - Why don't you and Edinburgh Sucks get together to do a blog ala Hannity and Colmes. To pay for it you could sell advertising to any former politicians or lobbyists looking for work.

... not so keen on 'teaming up' with Edinburgh Sucks; and anyway, I have no formal contact with ex-politicians or lobbyists looking for work :-))