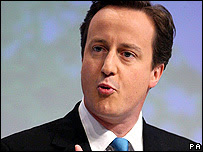 ... I should have put that money on Cameron being unable to resist having a pop at the PM :-(

That aside, and political bias admitted, I thought Cameron's speech was fairly competent in delivery but pretty light on any specific detail.

If the bookies were still taking odds, I'd certainly bet on that election being on Thursday 1st November ... okay, I got the 25th October wrong but at least I hadn't put any money on it :-)
Posted by Andrew at Wednesday, October 03, 2007