Del Boy would be proud 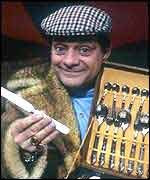 You've got to admire the sheer bravado in the Council News Release from this morning ... have a look here at the Administration's quote, from one of their Liberal number:

"We are delighted to see that our additional funding, for 18 police officers, together with the highly successful partnership working, has already had such a positive impact on crime levels in this area."

... errrm, that was the additional funding put into the Council budget in February 2007 (for financial year 2007/08) by the then Labour Administration, and if I recall correctly the Liberals voted against it!

... in addition, isn't that the very same budget that they've spent weeks whinging about - practically claiming that it was leading to the downfall of civilisation in Edinburgh?? (conveniently forgetting that it had been cleared by the Director of Finance as competent at the time).

And Lib-Dems wonder why they have a name for being 'opportunistic'.

You couldn't make it up - their sheer brass-neck is though impressive and frankly would put Del-Boy to shame.
Posted by Andrew at Wednesday, October 03, 2007

Oooohhhh. You have a link.

and this is really what the link is - not my day today - so many errors. I'm beginning to feel like a politician.