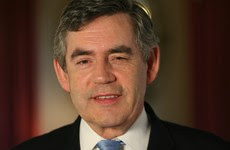 Listened to Gordon Brown's speech to the Labour Party conference earlier this afternoon - via my computer I should add, not in Bournemouth :-(

Putting my obvious bias to one side, I was astounded to NOT hear one single mention of David Cameron, the Tories, Ming Campbell, the Lib-Dems or any other Opposition figure or political party. Interesting.

I can't think of any such major conference speech in recent British political history where that has happened ... I could be wrong - sure someone will point it out if I am - but I found it a real breath of fresh air.

Ming Campbell mentioned Brown by name 11 times in his recent Leader's Conference Speech ... will be fascinating to see how David Cameron responds in his forthcoming conference address? Could he speak for an hour (or so) without having a go at Brown by name??

I thought it was the Tory party that held their conferences in Bournemouth. When did Labo.... Ooops. Just answered my own question. Sorry.

The Tory Party now support almost all of the social-policy legislation (minimum wage, maternity/paternity leave, holiday entitlements ... the list is endless) that this Government has introduced. They also now support continuing with the same levels of public spending as are currently planned under this Labour Government.

... maybe that's why thy are having their conference in Blackpool this year :-))

Yep. I think we will see a more ethical and professional approach to politics with Gordon Brown. He did a fine job as Chancellor and I am sure that as Prime Minister he will do well. I think he is a very rare and sincere person. He has VISION beyond anything you have seen so far. He has building his vision steadily over the past ten years and he has some way yet. Watch him - is will go down in history as possible the best ever UK Prime Minster. He won't give you any spin.

Just wait for the annoucement that Mrs T. has joined the Labour Party.

Anonymous 1 - surely not a hint of sarcasm there :-)

Anonymous 2 - I think she may, by proxy, already have done so:

... sorry, that link should have ended: