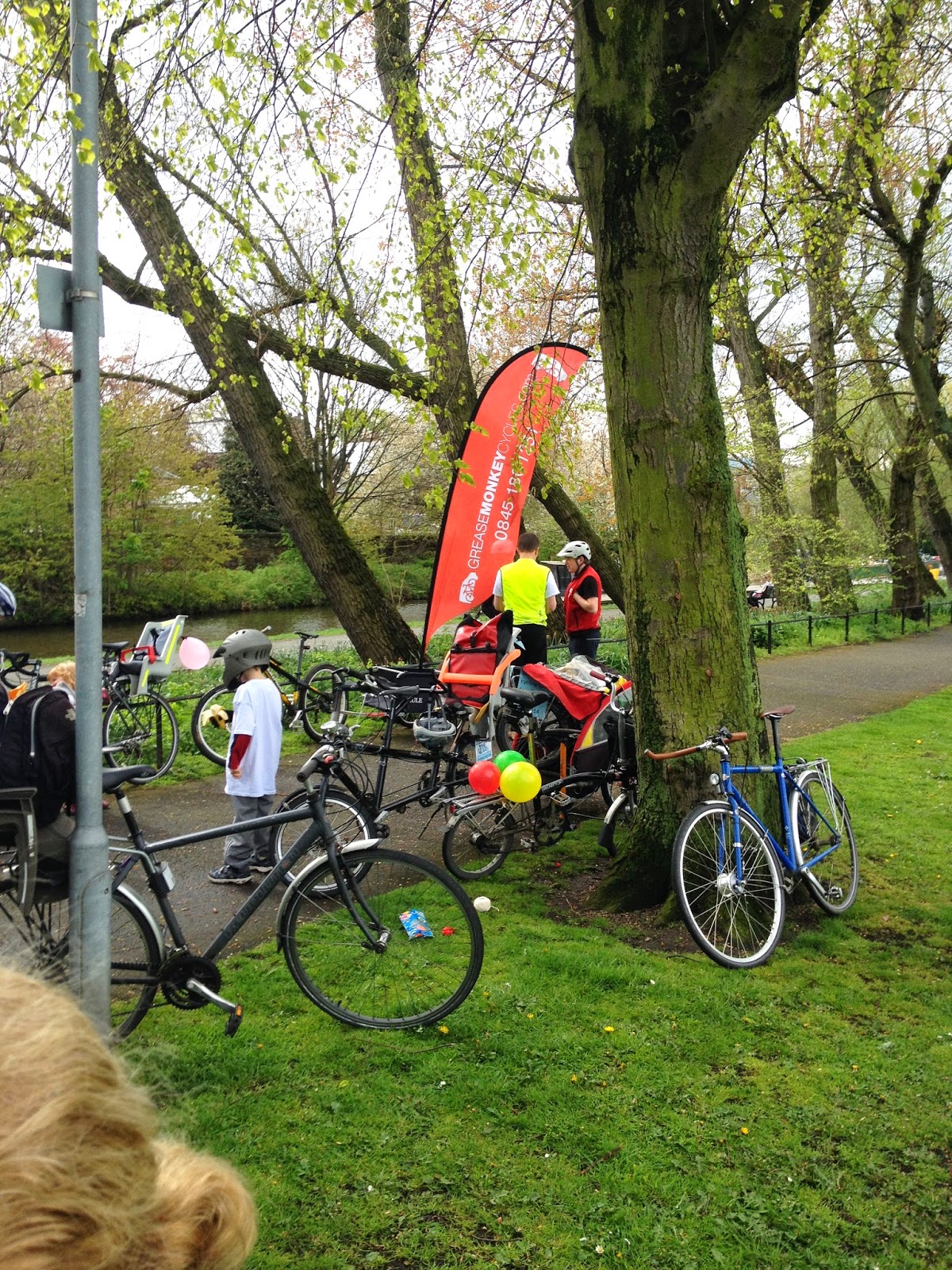 Managed to make it to the Pedal on Parliament (PoP) event today - first year I've been able to get along ...

... and I was hugely impressed with the turnout (between four and five thousand cyclists, I'd say?), the organisation, and the wonderful atmosphere :-))

Shot on the left, is of the Harrison Park (Shandon) Feeder-ride, which had +100-cyclists on it, and was led into town with the help of 2 cycling Police Officers ... was a wonderful way to arrive at The Meadows! 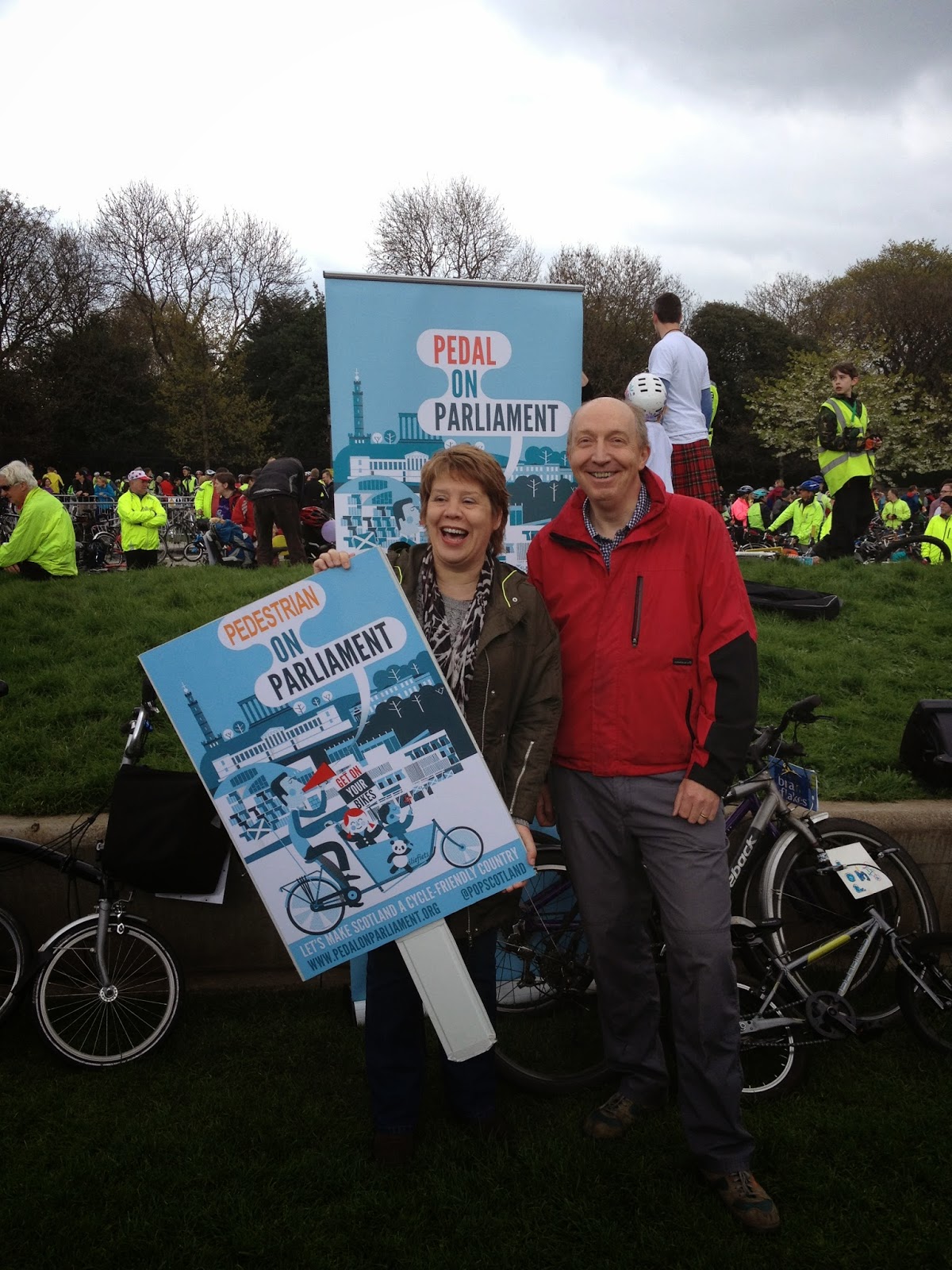 Then, from The Meadows, the assembled masses cycled to the Scottish Parliament ...

... several speeches ensued, and I was pleased Edinburgh received some positive mention --- knowing, as I readily acknowledge, that there is still a huge amount of progress to make!

Here's a snap of my colleague, Lesley Hinds (Edinburgh's Transport Convener) and me - taken just before the speeches started.

Wonderful day ... massive congratulations to all the organisers :-)

Thanks Ed - really enjoyed the day :-)

Indeed - many thanks for checking the blog.

Biggest comment I've noted is getting the organisation slightly slicker without going corporate, commercial and glossy.

It might have been a benefit for a police rendezvous at Newbridge, to bring the riders together as a group along the A8, with the benefits (especially in to the face of Saturday's Easterly 'breeze'). Knowing my approximate speed I was passed by a chain gang who left Glasgow 25 minutes after me, but lost my fellow Brompton user on the way in to town.

A ride of 2-300 came on to the Glasgow Road from Haymarket Terrace, most with the traffic signals, but the stragglers got a bit of criticism for blocking the start from the Glasgow Road green signal.

Next year I think it needs a bit more of that working with the Police to keep the feeder rides a) flowing and b) compact and social groups, building to the main event.

The other frustration was actually getting to see people I know who I knew were there, and having rendezvous points for interest groups - people from the North, South and West of Scotland, Brompton users, child trailer users, kids on balance bikes etc. But don't have a big event hanging around on Liz's lawn, what POP subtly but dramatically shows is how 5000+ people can arrive and assemble, and as swiftly and silently vanish from the centre of Edinburgh in a way you would never achieve with cars or even by bus.

It would be very useful to see what impact the event had on the many cafes, bars and coffee shops as almost every place I went past on the way home had a stack of bikes outside, proof if nothing else that encouraging cycling gives local business a boost.

The best move outside POP would be to have that Royal Mile Closure more often - starting with say once per month?

Those are all fair, and reasonable, points ... I will pass them on to the organisers if that's okay.

It was good to have you there, now if you can just implement our manifesto in full... ;-)

Thanks Kim - I really did enjoy the day.