Regular readers will know that moving Edinburgh towards being a cooperative capital has been a key theme of the new Council Coalition since it signed its coalition agreement back in May last year - the full text of the agreement is here, and further information on the Cooperative Capital approach can be found here ...

... and as well as our commitment (from last September) to establish:

- its worth highlighting the many, existing cooperative initiatives that are ongoing across the city: the map on page 12 of this report gives an indication of what's currently ongoing.

And in a few weeks time, another new energy coop will launch its share offer - details below, just in case you want to invest ;-) 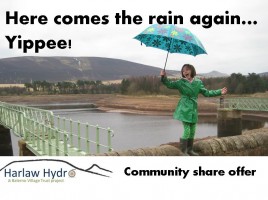 Harlaw Hydro Share Launch!
On Tuesday 9th of April at 7:30pm in St Joseph's, Balerno, the Harlaw Hydro team will be launching its share prospectus. The hope is that lots of people will be interested in finding out more about this exciting renewable energy project and will come along. Over a glass and a nibble there will be the chance to find out more and to put any questions to the Harlaw Hydro team.
Harlaw Hydro Ltd is an IPS (Industrial and Provident Society), a co-op in which investors become members of the society (Harlaw Hydro Ltd). As an IPS Harlaw Hydro Ltd can issue shares and offer interest on those shares to our investors. The interest will be around 4% and with a minimum investment of £250 we hope this will allow lots of people to be able to buy in.
The preparatory work is largely completed and the project is now ready to ‘go public’ and become a community owned renewable energy project.
The scheme will generate money from selling renewable energy to The Grid; enough electricity to power 56 UK average homes and could generate as much as £50,000 per year. Those invested in the project will be delighted to see the rain. We ought to be very happy people!
The money will be spent through the Balerno Village Trust (BVT) for the benefit of the community. BVT already have exciting plans supported by local people; the Victorian Walled Garden, Balerno Bees, more sustainable and renewable energy projects.
This is a project that should be of interest to all in the Water of Leith as well as to anyone interested in sustainable green energy. We hope to see you on April 9th.
For more information see www.balernovt.org.uk/category/harlaw-hydro/
Posted by Andrew at Friday, March 22, 2013