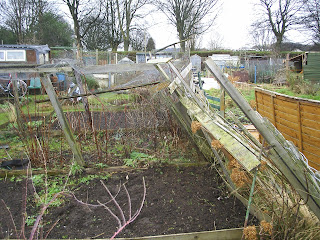 Spent all afternoon down at the Allotment today ... and MAJOR progress has, at last, been made with the long-running fencing project :-)

This first photo shows the pretty poor state of parts of the plot perimeter fence; and its particularly bad at the 'fruit-cage' section as shown! You can just see a very 'squashed' hydrangea right on the fencing edge :-(

Well - five hours of very hard-graft later ... with the help of a small bonfire! ... and the whole of the remaining perimeter fence and the 'fruit-cage' is down and all the wood that I couldn't re-use has been burnt. 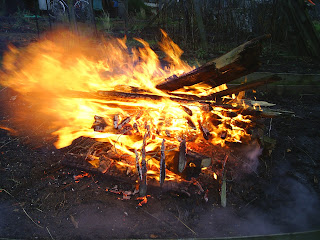 Third picture shows how its all looking now - you can see the hydrangea (bottom right) has much more freedom ;-)

And the plot definitely has a much better, more open, feel to it than before ...

... plan now is to put up some round fencing posts (I've managed to locate enough second-hand ones to circumvent the whole site!) and then to put a single (maybe two?) strap/s all the way round. Aiming to keep it around 3-foot high maximum and it will really be there to 'mark-out' the site and a lot more open than all the old 6-foot high fencing and wire mesh. 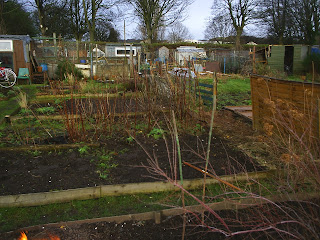 The site won't be as secure, but it will definitely feel better. And there's nothing much worth nicking from the shed/s anyhow :-)
On a slightly separate note, you can just see the rear-wheel of my bike in that last photo ...
... well - cycling home, along the canal, just as it was getting dark, with the wind at my back; masses of broken-ice on the canal slowly moving and sounding like a thousand small chimes; near full-moon reflecting on the canal; with the solar lights all shimmering --- was totally magical.
Perfect end to a successful Allotment-day :-))
Posted by Andrew at Saturday, February 04, 2012