A Living Wage for council workers 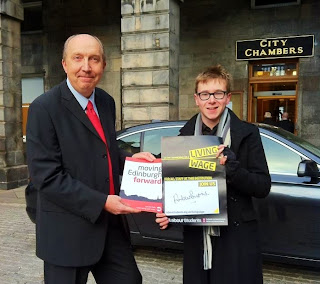 Now I know you will have noticed (!) that our recently-launched consultation document had a commitment to introduce a Living Wage for council workers thus ensuring that all employees are paid a fair wage ...
... well, earlier today, I was thus more-than-happy to sign up to the Edinburgh University Labour Students 'Living Wage' campaign.

"I'm delighted that the Labour Group have backed a Living Wage for council workers. The individuals working tirelessly for our city deserve the dignity of a decent wage, and with the announcement that Glasgow City Council is to pay its staff a Living Wage, it's time Edinburgh followed suit. Edinburgh Labour Students have made this their priority for the year, and won't rest until poverty pay is stamped out in our city"