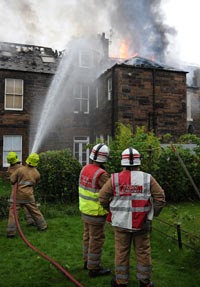 As local residents will know only too well, there was a really serious fire in the Shandon Colonies last week - it attracted some coverage in the Evening News here and here ...

... I've had a significant amount of correspondence about the incident - with particular emphasis on the parking problems.

I now have a definite update on these local parking issues, which have been brought into sharp focus by the recent fire - and I'll just repeat the main points here, for those who may not have been in contact with me directly ...

... I'd welcome any views, but - most importantly - no matter if you agree with me or not, I'd really welcome all viewpoints being expressed in the upcoming 'formal consultation' as its the only way we'll get a proper picture of the overall thoughts of the area:

Many Colonies’ residents have indeed been in touch, following the fire, expressing significant concern about the parking situation in the immediate local area. I was pretty shocked myself by the fire in Hazelbank Terrace: as many of you know, I used to live in the street; still live just a few hundred yards away in Cowan Road; and one of my son's Tynecastle friends' house was involved last week and was totally destroyed.

I thus completely share the frustration at the lack of a long-term parking solution being progressed thus far ... and again, as many of you know, there was an ‘informal consultation’ on extending the Controlled Parking Zone (CPZ) to the local area some time ago. The result of that ‘informal’ consultation was that the ‘Ashley Area’ and ‘Ogilvie Terrace/Harrison Gardens/Place’ were in support of inclusion within any new CPZ but the Shandon Colonies were not. As reported at the time, this was to be taken forward with a ‘formal’ Traffic Regulation Order (TRO) to advertise this intention and seek local views before actually progressing to any implementation.

Following feedback, at the time, I (along with other Council colleagues) successfully lobbied the current Council Coalition to ensure that the Shandon Colonies – and the rest of the Shandon Conservation area (Shandon Crescent/Street/Road) – would also receive the formal letters announcing the CPZ consultation. This means that Colonies’ residents will get a chance to have their say on the ‘formal’ proposals and to argue – if they wish – to be included in any extension of the CPZ.

I have now had it confirmed from senior Transport Officers that this ‘formal consultation’ will commence in the first week of October 2011 and that everyone in the streets mentioned above will receive a letter from the Council asking for their views.

I have to say that, on balance – and particularly following the devastating impact of the fire last week – I personally believe that the Shandon Colonies should be included in any CPZ extension. I’m all too aware this may not be everyone’s preference, but I feel it important to be clear about my own view prior to the start of the ‘formal consultation' and I would urge everyone ... no matter what your views ... to please make sure you respond to the consultation when it commences in October.

Frankly - I don’t think the prospect of the rest of the surrounding area being included in any CPZ extension, whilst the Colonies remained outwith, is a positive one - it could well simply exacerbate current problems in the Colonies. I really do therefore urge everyone to please make sure you take part in the ‘formal consultation’. I’ve now made my own preference clear, as above.

I hope this update is helpful - as ever, don't hesitate to get in touch if you need any further clarification.

Thank you for the update. I will look out for the formal consultation letter. The parking situation in the colonies needs urgently to be dealt with. We live at the very end of the main street going through and have had to deal with ongoing issues of rubbish and recycling not being collected because cars have blocked the way of the pickup vehicles. As well there have been at least two incidents in the last year when ambulances could not access houses down here. I welcome any parking plan that would deal with these issues.

Thanks for the comment. Please do make sure you take part in the formal consultation in early October.