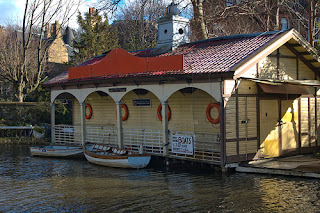 Before jumping on the train to sunny North West England, have just been on a brief (but formal) site visit to the Canal [at Ogilvie Terrace] by the Council's Regulatory Committee.

Bit of a local issue bubbling away re- the application for a traders license (food) at the canal edge ... I have to say, I've been assuaged by a very large number of objectors and a smaller number of supporters.

On balance, I think the majority have it right this time ... Council-watchers will know that I'm not one for automatically going with the majority - often to my cost! ... but do feel strongly that the location is just not appropriate in this instance.

The application now goes, for final decision, to the Regulatory Committee Meeting in a couple of weeks. Watch this space ...
Posted by Andrew at Friday, November 02, 2007

Andrew,hardly a crisis, you are begining to project an edinburghsucks.com maniacal spin on things. please check the EEN forums for the actual word of the people on this one. Give the guy who wants to provide a service a chance. There was a floating restaraunt there, and the council have that massive continental market clogging up north castle street. Do the right thing, oh sorry i forgot you were a polititian! LMF is what you lot generally display.

P.S. I should, of course, have entitled the post 'Canal ripple'