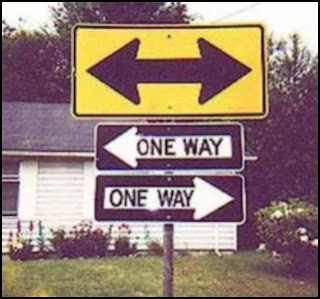 Start of the new week - and there's still a distinct lack of clarity in the air (and no real sense of direction) concerning just what happens next, following the collapse of the proposed Schools Rationalisation programme.

The first 'Children and Families' electronic newsletter - since early July - came round today and not a sentence about the events of the last few weeks ... just a link to the Press Release from last Monday announcing the end of Coalition support for the proposed programme.
To be fair, the Department have sent two e-mails to all members of staff - one last Monday (3rd) simply reporting the said Press Release; and a further one today (10th) indicating that a special Meeting of the Council has been organised for Saturday 15th September to formally terminate the whole process.
But - that second e-mail says it all really. The whole process HAS NOT yet been terminated; and all that's happened is a collapse of Coalition support for the programme that was announced to the world by Press Release.
As I argued last Tuesday (4th) ... Edinburgh does deserve some answers ... it still hasn't received any yet.
I, for one, am still not confident about the ability of the current 'political marriage' to offer a stable way forward for the city of Edinburgh. I'd actually like to think I'll be more confident following the meeting on the 15th - will they offer an apology and an explanation for what has happened, whilst accepting the need for a more inclusive-approach to these issues?
We'll hear soon enough.
Posted by Andrew at Monday, September 10, 2007

Totally understand your lack of clarity. Just been over the read your colleague's (Bunty Backhander) blog and there sure is one hell of a lack of clarity over there with where they money has gone etc. Let's hope it is not found that the whole administration was like that, hopefully it was just the City labour leader contenders.

Here blog is here. Comments on this post are extremely interesting.

Leaving my comment above alone. Not touching it with a bargepole. Finger swithering over the delete key.

In case you were not aware, we've only had the first three chapters with number 4 coming later this week. I am sure it will be a drawn out book. The main question in North Edinburgh and the Forth Ward is "Will it have more episodes than Harry Potter or will number 7 be the killer chapater?"

As you know, I NEVER delete any comments (other than obvious spam advertising) and I have a COMPLETELY un-moderated approach (which is pretty unusual for a politician's blog) ... I really would like to keep it that way.

That doesn't mean I need to reply to everything, especially when the comment is not 'directly' related to my own post and/or me.

I would genuinely welcome your help in enabling me to keep comment moderation to zero.

I totally understand. I suppose I do get a bit 'off-topic' or 'playful' sometimes.

I do seriously hope that I have nothing to do with you having to moderate.

Wot's the betting on Cllr. Maginnis making good use of the delete key when she returns from sunnier climes.

"As you know, I NEVER delete any comments (other than obvious spam advertising) and I have a COMPLETELY un-moderated approach (which is pretty unusual for a politician's blog) ... I really would like to keep it that way."

I am sure that is why this blog made it to the finalists of NYNMA2007 - Inclusion, in practice, is such a rare thing in our fair city and I am over the moon that you practice it with gusto.

Okay - just to be clear; I've no intention of moderating comments ...