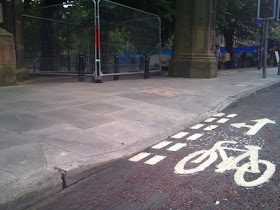 The Council officially opened the "Quality" Bike Corridor, which runs from the King's Buildings Campus in South Edinburgh to George IV Bridge in the city centre, in the middle of last month ... details in the News Release here.

I caused a bit of a twitter-storm, when in response to some fairly robust criticism of the new route, I tweeted that I thought it was "at least a step in the right direction" :-(

Needless to say, I was challenged to cycle the route and find out for myself the error of my assertions!

So - at the end of last week I did just that and, in the company of a few of my on-line critics, cycled the route from Kings Buildings to the City Chambers.

Now - I'm probably about to start another twitter-storm, but I may as well be frank with my assessment of what I found on the ground ... so to speak!

Three problems did stand out:


Overall though, I reckon the big mistake we made as a Council (and that's ultimately my responsibility) was to 'over-claim' just what's been implemented along this corridor: its a cycle-lane, and I can see now why my twitter comments led to such a storm of response.

So - thanks to my critics for cycling with me.

I'll pursue the points above - to see if they can be improved on ... and I've already reflected carefully on just how these developments are publicly promoted.

As ever, I'd welcome any further (constructive!) feedback?