Edinburgh Labour's vision for the Capital

One City: Our City; a European City to be proud of ...

On Thursday 4th May, the residents of Edinburgh will elect City Councillors for the next five-year period. Our vision for Edinburgh is set out in our local government manifesto "One City, Our City: A European City to be proud of", available to download below.

Back in November 2016 we published a ‘draft manifesto’ in preparation for the next Local Government Elections in May 2017. This document represented our initial ideas, but we sought your input and used this feedback to adjust this draft document before launching our final Manifesto on 21 March 2017.

This manifesto is the result of a consultation process which has seen submissions from citizens, community groups, business, trade unions and events such as the Side by Side Conference in North Edinburgh.

We received over 1,000 submissions and re-drafted our final Manifesto as a direct result of that feedback.

Thank you for contributions and hopefully you will see that this has substantially revised the draft document which sought views last year. 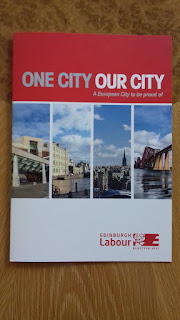