The mechanics of local democracy ...

Had a short piece in last Tuesday's Evening News, about the behind-the-scenes 'mechanics' of our seemingly endless, election-events ... you can see it here; and I'll re-produce the main text below: 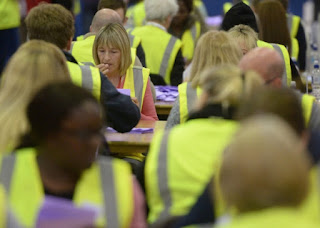 WITHOUT the thousands of staff turning out at polling stations and counts, voting would not go as smoothly, says Andrew Burns.

ALL of Scotland’s new MSPs are now sworn in, and Holyrood has started its fifth term. But before we reach the opening First Minister’s Questions of the new session, I think it’s worth pausing, putting party politics to one side, and reflecting on the sheer scale of what has just been undertaken – all relatively smoothly – across the country.

I don’t have the exact details for every part of Scotland, but here in Edinburgh just under 60 per cent of the 366,000 registered voters cast a vote – some 70,000 of them being registered for a postal vote.

Those voters were able to attend one of 145 buildings that were used as polling places, spread right across the city. Within those 145 building were 356 polling stations, each station having two ballot boxes for the respective constituency and regional ballot papers.

Among the equipment used across the polling places during election day were: about 700 yellow Post-it notes, 500 black bin bags, 145 sets of pliers and 1068 fingerettes (the rubber thimbles use by counters).

And during Thursday May 5, from 7am through to 10pm, those polling places were operated by more than 1000 polling staff – and once the polls closed, a further 1200 people were out at the Highland Hall at the Royal Highland Centre to ensure the ballot papers were tallied and counted – the Highland Hall counting area was actually larger than the size of a professional football pitch.

Many readers may well be aware that during that count process, dozens of members of political parties from across the political spectrum carefully scrutinise what goes on – physically, looking right over the shoulders of the counting staff.

It’s a process which, as I’m sure you can imagine, does occasionally get tense. Yet, in the numerous election counts I’ve attend throughout my time in Edinburgh, I have never once heard a single complaint from a member of the counting staff about the intense scrutiny they come under.

Indeed, I’m endlessly amazed at how calm, collected and polite they all are at 2am, when someone asks them a vague or outlandish question about the process they are undertaking.

At the end of it all, the results have to be agreed with the numerous political parties taking part; they have to be announced publicly to the waiting media; and – crucially – the whole process has to be seen as fair, ­thorough and professional – and the result thus accepted by all concerned in the race.

Frankly, I’m amazed that year after election year that outcome is successfully achieved; and a clear result, which is accepted as fair by all concerned, is arrived at just a few hours after the polling places close.

I, for one, think we should give huge thanks to the thousands of individuals who make this whole election process run so smoothly. The scale of what they undertake – both on polling day, and throughout the overnight count – is really quite remarkable, and we take it for granted at our democratic peril.

And, of course, while the Holyrood election may now be over, the same public servants, in the main, are now planning the detail of our next major electoral event: the referendum on Britain’s membership of the European Union, which takes places on Thursday June 23.
If you have already registered to vote – great. If not, you have until Tuesday June 7 to get on the electoral register in order to cast your referendum ballot.

That ballot will be processed and counted by the same thousands of dedicated staff who have just ensured such a smooth Holyrood election. Regardless of our politics, they really do deserve our thanks.
Andrew Burns; Leader of Edinburgh City Council