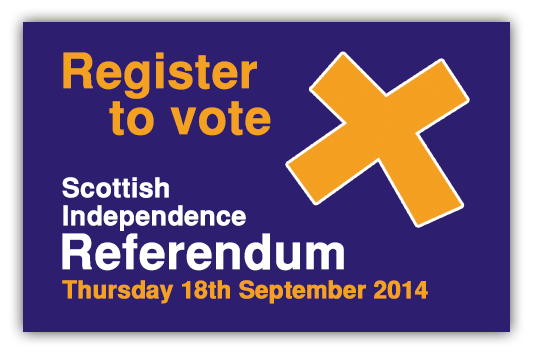 High levels of excitement during the week just past, as my own and my partner's Referendum Poll Cards arrived ... but, my excitement wasn't so much about those, as the third card that dropped through our letter-box --- the one for our 16-year old son ;-)

I've long been a supporter of Votes at 16, and I'm absolutely delighted that the franchise has been lowered for this vote --- it must surely now come down for other elections?

As things stand at the moment, Junior will get a vote in a few weeks time on the constitutional future of Scotland (quite rightly so, as far as I'm concerned), yet on the first Thursday in May next year he won't be able to cast a vote in the UK General Election, and won't get to do so until May 2020 by which time he'll be 22-years of age :-(

But - all that aside - and whichever way you intend to vote on the 18th September ... I really hope you will vote!

There most likely will not be such a significant electoral event again in our lifetimes - and if you haven't yet got a Poll Card and/or you're not sure if you are on the Electoral Register; then you have until Tuesday 2nd September to register ... just go here: http://www.lothian-vjb.gov.uk ;-)