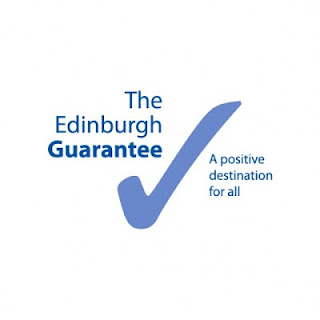 Very, very good news for the Edinburgh Guarantee programme today, as Scottish Government figures have confirmed that more Edinburgh schools leavers than ever are moving directly into work education or training.

More school leavers than ever in Edinburgh are moving into work, education, or training.
This is thanks to the strong partnership that has developed between the public and private sectors through the Edinburgh Guarantee.
Figures published by the Scottish Government today show that the success rate of school leavers in Edinburgh achieving and sustaining a positive destination are at the highest rate ever in Edinburgh. The figure is up 3.3% on the same time last year and is now at 89.8%.

The figures in some areas have gone down, while Edinburgh's figure is now above the national average.

A positive destination is defined as a place in Higher Education, Further Education, a job, paid apprenticeship, or work-focused training. At a snapshot taken in March of this year only 8.3% of recent school leavers were recorded as seeking a destination.
The statistics show that more school leavers in Edinburgh are getting into jobs compared to September 2012 with over one in five of school leavers in employment at the snapshot taken in March. Just under 40% are getting into and sustaining places in Higher Education while almost a quarter of school leavers opt for Further Education.
Comparing schools, 15 secondary schools working with their partners have improved their performance since September 2012. One school, Queensferry High had six school leavers still looking for a job or training in March and now boast an almost 100% success rate with every school leaver except one placed.
This success has been underpinned by the active support of the city’s employers in recruiting young people into their businesses, with 120 opportunities offered since April.
Cllr Paul Godzik, Convener of the Children and Families Committee, said: “Whether it’s employment, apprenticeships or training, young people need to move out of school and into a positive destination quickly. It is really encouraging that there has been such an improvement in the figures this year as moving on to make a new start in life is the boost young people really need to raise their self esteem at this critical point in their lives.”

Cllr Frank Ross, Convener of the Economy Committee, said: “Ensuring that Edinburgh’s young people have opportunities is vital for the economic success of our city. These figures show that focused collaboration through initiatives such as the Edinburgh Guarantee are making a real difference to many young lives. I am confident that with sustained investment we’ll continue to see future improvements in the number of young people moving to a positive destination after school.”

Thanks for checking the blog; and for the link.