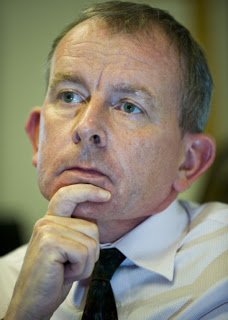 Most readers will know that my Coalition Colleague, Tom Buchanan, died last Wednesday 3rd April; after a courageous battle with a brain tumour.

It was Tom's funeral today. Obviously, a very solemn occasion ... but also a day full of fulsome tributes from many, many colleagues, friends and family.

Very hard to sum up such occasions - so I'll just post the link to the very fitting obituary that Martin Hannan wrote in The Scotsman last week ... here ... and paste below the few words that my colleague Steve Cardownie, and myself, released on hearing of Tom's death.

Councillor Steve Cardownie, Deputy Council Leader and leader of the SNP group, said: "Although Tom has been ill for some time now it doesn't lessen the shock or sadness of his leaving us so many years before his time. The impact that he had in a relatively short time with the Council, and as Economic Development convener, was second-to-none. In the midst of a worldwide recession, his drive and stewardship of the city economy left Edinburgh in a much better place than it would have been without his leadership.

"Tom was incredibly hard working as well, always the first in and the last out of the office, but you could see how much he enjoyed it. Having worked with him for nearly six years I can say that he became a firm friend to me, and to many others, as well as a colleague. He will be very much missed by all of us and the city as a whole, but we hope that his work will have a fitting legacy in a proposed scholarship fund for Edinburgh's young people."

Cllr Andrew Burns, Council Leader, added: "Like everyone at the Council, I'm deeply saddened to hear of Tom's death. My thoughts, and the thoughts of all those who worked with him, are with his family and friends at this very difficult time. Tom brought relentless energy and enthusiasm to his role as Economic Development Convener, particularly to the Council’s Strategy for Jobs. He was incredibly passionate about this, especially when it came to creating opportunities for young people, and he will rightly be remembered for it."