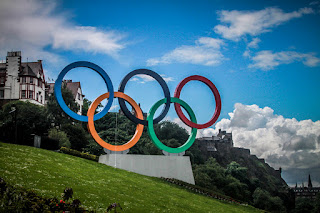 With all the negative press about a small sporting event which starts in a couple of weeks, I reckon its as good a time as any to own up that our main Summer Holiday this year is to go to --- yes, you've guessed it: The London Olympics ;-)

We're off down to Kent for a couple of weeks at the end of July, and managed (some time ago, through the much-maligned bidding process?) to get 4 sets of tickets: men's football at Wembley (UK v UAE game!); men's volleyball at Earls Court; women's hockey in the Olympic Park; and the women's football final, back at Wembley.

Really looking forward to it all, and hoping ... probably beyond hope? ... that the women's UK football team makes it to the final: with Ifeoma Dieke and Kim Little in the squad, how can they fail :-))
Posted by Andrew at Thursday, July 12, 2012