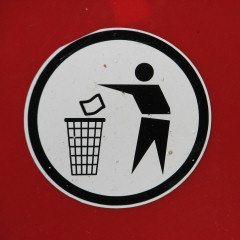 "But this year for the first time it (Glasgow) has scored a cleanliness rating of 70 out of 100 – one ahead of Edinburgh.

Keep Scotland Beautiful found all nine recorded scores below 75 out of 100 highlighting the problems faced by councils with high population density.

However its findings state: “Since 2003/04, there is clear evidence that the cleanliness standards have improved significantly.

Of the areas included in the Glasgow league table, East Dunbartonshire scored the highest cleanliness rating at 74.

North Lanarkshire and Renfrewshire both scored 73, Dundee and Falkirk, 72, Aberdeen and West Dunbartonshire 71 and Edinburgh 69."

Bottom of the urban cleanliness-league for the Capital :-(

Again unsurprisingly, the Council (here in Edinburgh) have produced no Press Release trumpeting this great achievement ... unlike the many that are churned out every time Keep Scotland Beautiful produces any figure that shows the slightest glimmer of progress :-(
Posted by Andrew at Wednesday, January 04, 2012